Kim Ki-duk, one of the best known South Korean auteurs overseas, is causing a stir with his film “Arirang” that was screened at the Cannes Film Festival’s side bar section, the Un Certain Regard, on Friday.

Naming actual figures, Kim aggressively poured out his anger and criticism toward his colleagues, Korea’s film industry and the government.

The dark film which Kim wrote, directed, produced and acted in all by himself, is his emotional self-portrait filled with personal lamentations about the reasons he is stuck at an impasse. Kim acts as three personas ― the interviewee camping out in a desolated mountain where there is no running water; the interviewer whose hair is tied up; and a shadow Kim.

In the movie, he calls director Jang Hoon, who used to work with him, a “betrayer.” Soon after Jang became known with his first film “Rough Cut” for which Kim wrote the script, he signed up with Showbox, a major movie production house. Jang became a star director with his next movie “Blood Brothers” which drew 5.46 million.

“I feel miserable that he betrayed me and signed a contract with a major producer for ‘Blood Brothers’ because he could not resist the temptation of capitalism,” Kim says in the movie. 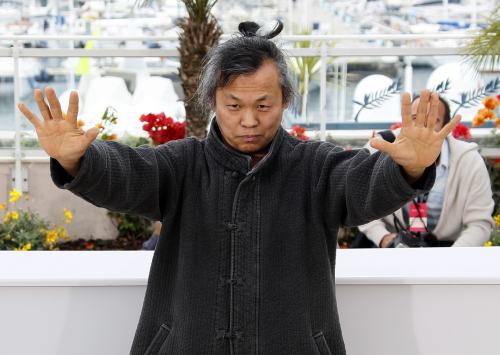 “The government gave me an award for winning a prize at a foreign film festival. There were even scenes where Korea was portrayed negatively. Did they even watch the movie? What an irony,” he said.

Though he did not name anyone in particular, he sent a message to actors and actresses who usually take roles as villains that “when you act villains that well it means that you are that evil.”

Kim is a representative figure of Korea’s low-budget art films. He gained international fame in 2004 after winning prizes at Venice and Berlin film festivals for “3-Iron” and “Samaritan Girl,” respectively. However, he was never really popular with the Korean audience.

Kim broke his three-year-long hiatus with “Arirang.” Rumors about his poor situation had spread ― that he was nearly crippled because of a string of shocks and betrayals he suffered.

He disappeared from sight after his 2008 movie “Dream” in which the main actress ― Lee Na-young ― nearly died while shooting a scene of hanging herself. For the film “Movie is Movie” which he wrote and produced, he received no earnings because the distributor went bankrupt.

But his anticipated comeback was not the only reason spotlights were on him Friday. He attracted eyes, appearing to be more eccentric and strange than usual. Decked in a gray coat with his hair tied up, he demonstrated some martial art-like-movements. In stark contrast to his eerie film, he constantly grinned.

“I was in a sleep and Cannes has woken me up. This film is a way of asking myself who I am and what cinema is,” said Kim before the screening of “Arirang.”

In the single interview he did ― he turned down most interview requests saying that “the film tells everything” ― with French broadcaster Canal Plus, he suddenly started to sob while singing “Arirang.”

“I am peaceful compared to a year, two years or three years ago. I am in the middle of curing myself, so I am my doctor. But I do not want to be perfectly cured. Making movies is in a way sort of a disease,” he said after mentioning that he really needed this film.

“I am aware that my movies could produce many patients, and in that sense, that it could be big crime. I believe that somewhere, there could be people who changed because of my movies. So I do have inner conflicts about that,” he added.

He cried his heart out while belting out the song in the movie as well, drunk. He constantly swore and blurted out comments such as, “I am most happy when I am making movies but devils are trying to stop me from making them.”

The most shocking part of the movie is the ending where he makes a hand gun and sets out of his tent, saying he is “going out to kill the betrayers.” Gun shots are heard three times at three different buildings and the movie ends with him pulling the trigger with the gun pointing at himself.

Opinions are split about the movie ― some praise Kim’s experimental efforts while some criticize it for being nothing more than a personal grumble.

“It is a movie that only Kim Ki-duk can make. It tried many things that cannot be seen in other movies. He presented it like a documentary but it is actually a drama that will turn over his film career and life,” movie critic Jeong Chan-il told the press after the screening.

The Film Stage, another U.S. online media, however, commented that it is “the type of thing you’d expect to see from a video blog.”

“The film should be released for free online since it’s the kind that most people would not want to pay for,” it reported.

Variety, a U.S. entertainment news media, mentioned that the movie is “an experience that can be likened only to being stuck next to a drunk in a bar who keeps reminding you he used to be famous.”

“It’s a grind to watch, even for fans of the maverick writer-director’s work. Kim’s rep will inevitably ensure further fest bookings for what is essentially one long whine, but theatrical distribution anywhere looks highly unlikely,” it said.

No local distributor has picked up the movie yet, so it is not clear if it will be released in Korea.