The program was part of the arts center’s seven-year concert series offering diverse symphonic programs from Haydn of the late 18th century to Shostakovich of the 20th century, through 2017.

Conductor Chung Chi-yong and KBS Symphony Orchestra’s Haydn Symphony No. 83 in G minor, famously known as “the Hen,” started immediately after a welcoming applause of the audience.

Chung and the orchestra began the first movement full of energy and life. The second movement in graceful andante and the third in minuet were presented in interesting contrast. The final movement ended with lively rhythm, making Chung almost dance.

Then on the stage was virtuoso cellist Chung Myung-wha in a wine-tinted violet dress and glittering silver high-heels, ready for Cello Concerto No. 1 in C Major. 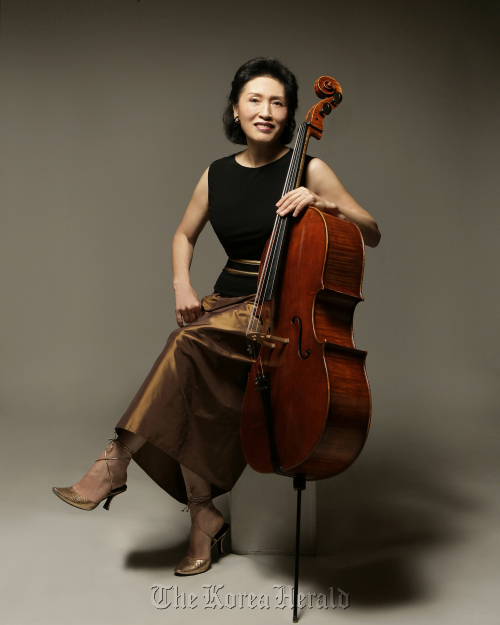 Cellist Chung Myung-wha. (Goyang Aram Nuri Arts Center)
As she listened to the introductory part of the first movement sitting next to the podium, she seemed as though she was in emotional preparation.

Chung’s bow moved roughly on the strings, leading the entire orchestra. The cello sounded like it had aged gracefully with its master. At times domineering, then yielding, Chung’s charisma overwhelmed the audience. Her powerful allegro molto in the third movement led to four waves of applause after the ending, with some audience members repeatedly shouting bravo.

The KBS Symphony Orchestra wrapped up the performance with Symphony No. 104 in D Major, or “the London Symphony,” the final symphony of Haydn.

With a slow but grand introduction, the first movement began. The third movement’s minuet and a trio left a strong resonance and was re-staged for an encore.

The concert in general was quite enjoyable partly due to the good manner of the audience. Even though there was a large proportion of children in the audience, probably because of relatively cheap tickets, there wasn’t any wrong-timed applause in between the movements. Neither was there any ringing of cell phones, which often ruins the whole atmosphere.

The parking ticket cost only 2,000 won for six hours and it was not difficult to exit the parking lot even when cars were rushing to leave the venue.

The last concert of the 2011 symphonic series will take place on Oct. 28 with the Korean Symphony Orchestra and flutist Yoon Hye-ri, performing both Mozart’s Symphony No.1, Flute Concerto No. 2 in D Major K.314 and either Haydn’s Symphony No. 86 or Symphony No. 103. For more information, call 1577-7766 or visit www.artgy.or.kr.