In memory of renowned scriptwriter Cha Beom-seok who passed away five years ago, musical and play producer Seensee Company is staging his signature play, “Sanbul” (Forest Fire) next month.

Born in Mokpo, South Jeolla Province, in 1924, Cha was one of the first generation post-war scriptwriters and wrote original screenplays carrying the complex sentiments of South Koreans at the time. He was also the writer of the nation’s longest-run TV drama “Jeonwonilgi” which MBC ran from 1980 to 2002.

“Sanbul,” Cha’s best known piece, unfolds a story about four women living in a remote mountain village after the Korean War. By delicately depicting the four’s emotions ― especially after a young man comes across the village ― the play expresses how a war can tear up even the lives of innocent country women. The play has been adapted into many genres including opera, “changgeuk,” or Korean opera, musical, TV drama and film. 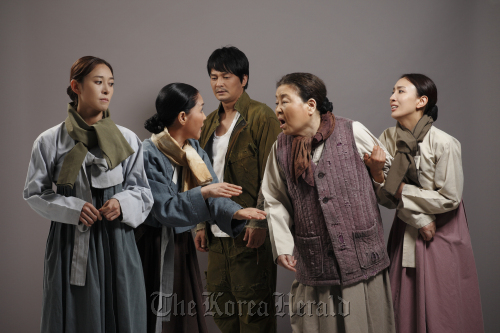 Jang Young-nam (from left), as “Sawol,” Kwon Bok-sun as “Ms. Choi,” Cho Min-gi as “Gyubok,” Kang Bu-ja as “Ms.Yang” and Seo Eun-gyeong as “Jeomrye.” (Seensee Company)
“‘Sanbul’ premiered in 1962. It was common sense back then that original plays cannot attract audiences. But ‘Sanbul’ marked a great success. Audiences roared in, even ending up breaking one of the windows at the National Theater of Korea which used to be at the venue where Myeongdong Theater is now. It was a moment that showed us that an original play can be a hit too, if it is good enough,” said Im Young-woong, the director of this year’s “Sanbul,” at a press conference at Namsan Art Center last week.

Under Im’s direction, veteran actors and actresses who worked with or learned from Cha, including Cho Min-gi as “Gyubok,” Kang Bu-ja as “Ms.Yang” and Gwon Bok-sun as “Ms.Choi,” will star in the play. They will be joined by younger artists who confessed that they did not know much about Cha before, including Jang Young-nam as “Sawol’ and Seo Eun-gyeong as “Jeomrye.”

Kang, an actress known for her roles as mothers and grandmothers, has appeared in most big “Sanbul” performances ever since she was selected by Cha in 1962.

“I started out as Ms. Choi, but later started to act Ms. Yang. The forest-burning scene, the images of the village and in fact all the lines are so vivid in my head. Every time, I try to create a different Ms. Yang,” said Kang.

The director said that he will focus on reminding the audience of the play’s original spirit ― “there should be no more wars, as they destroy humanity.”

“In the earlier days, I think there were times when the play was disguised as an anticommunist play because that was the only way to be staged. Although some still seem to think that is the purpose of the play, it is not so simply about that. Not many remember the Korean War these days. I want to remind people of the Korean War and help them realize what it really was,” said Im.

Though “Sanbul” is a popular play that is still being staged in many small theaters throughout the country, this performance is notable not just because of its star-studded cast but also the size of the theater.

Park Myung-sung, head of Seensee Company, said that all staff members working on the play have much experience of staging big musicals.

“We are going to make the best use of our developed stage mechanisms and make the audience feel as if they are not watching a play but real situations. We have expanded the audience spectrum to the middle-aged through many musicals. Through ‘Sanbul,’ we aim to find a new audience group willing to buy expensive tickets for big theater plays,” said Park.