One thing you don’t see robots doing, though, is jamming with a live, human orchestra. Breaking into a 12-bar solo is something that’s still pretty much the province of people.

Except at the California Institute of the Arts, where MahaDeviBot, GlockenBot, BreakBot and a handful of their cyber-friends have been making music with students in the small private school’s music and theater arts classes. 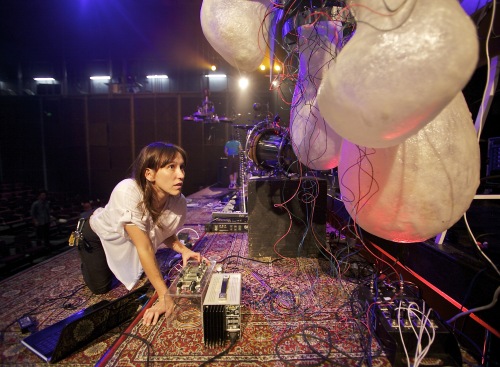 Lizzie Eggart, a Master of Fine Arts technical direction student, works on her Egg Babies light robot part of the KarmetiK Machine Orchestra robotic orchestra. (AP-Yonhap News)
For months, a dozen human musicians and a near-equal number of robots have been getting their groove on in anticipation of a concert they were to perform Thursday night at the school’s Walt Disney Modular Theater.

“It’s like a symbiotic relationship between humans and machines,” says Ajay Kapur, a musician with a doctorate in electrical engineering who heads the music technology program at the school co-founded by Walt Disney. “There’s a lot more interaction between the humans and the machines than just one person programming the robots and pushing the play button.”

As he spoke, students and bots were frantically preparing for their concert. Tammy, a robot marimba player, fiercely shook her bells as two of the orchestra’s drummers, NotomotoN and BreakBot, laid down a raucous beat. Their selections ran toward a melodic fusion of jazz, hip hop, electronica and world music composed by Kapur and the students.

The concert was essentially four years in the making, beginning the day Kapur, a jazz-trained sitar player, arrived at the school in the picturesque hillside country just north of Los Angeles. He had come on a mission: Create a full-blown orchestra composed equally of people and robots, with trained musicians manipulating and instructing the bots.

He and Michael Darling, who runs CalArts’ theater arts program, set about recruiting the musicians from their classes and building the robots out of everything from leftover theater props to busted furniture. Then they filled their little robot brains with open-source-code that allows the machines to read programmed musical compositions and play different scores.

“We forage a lot of stuff,” Darling said. “We have to buy some stuff, but we also scour electrical junkyards all over the Los Angeles area.”

As he spoke, he stood on stage next to Tammy, the orchestra’s marimba player. The bot, which stands several feet tall, was built with an old swivel chair, a collection of small abandoned bells and some stuff that looks like old plumbing fixtures. Tammy may not be much to look at with her one Cyclops eye that Darling added for a laugh, but fire her up with a jolt of electricity and she plays some mean marimbas.

Put her with the others and, ladies and gentlemen, you have the KarmetiK Machine Orchestra (the name is short for karma and kinetic).

The players are not the world’s first accomplished musician-robots. One that flawlessly plays “Flight of the Bumblebee” on a flute, faster than any human can, was built a few years ago at Japan’s Waseda University. But it’s simply a soloist that only repeats what it’s been programmed to play.

Jazz guitarist Pat Metheny took a robot orchestra on the road with him last year in support of his album “Orchestrion.” But the bots played preprogrammed compositions while Metheny improvised on guitar.

Trimpin, the kinetic musical composer-inventor, and the recipient of a MacArthur genius award, has seen the orchestra himself and calls the work done at CalArts groundbreaking.

“Ajay and Michael, they are among the leading forces in this country when it comes to having the facility and the knowledge for working with kinetic objects to make music,” he said by phone from Stanford University, where he was demonstrating some of the musical objects he’s created.

Although the students have written the music and taught the robots to play it, the bots do get a few moments of their own to improvise. As people in an audience sway to the music in their seats, robots placed under those seats are told to lay down a beat of their choice in time to the movements. (Darling likes to call that spontaneous composing by the audience’s butts.)

Meanwhile, Egg Babies (so named because it was created partly out of plastic Easter eggs) will be working on part of the elaborate light show.

“It responds to sound,” theater arts student Lizzie Eggert explained. “Depending on what kind of note it is, bass, high note, treble, it will respond with a color.” And Egg Babies gets to choose the color.

For Kapur and Darling, teaching the students and robots to play as one is just a beginning.

Next year they hope to create a musical with a back story set in Mumbai, India, in the year 2050. Robots will have taken over and people will be playing electronic music.

Ten years down the line, Kapur hopes to have the orchestra advanced enough for a musical retelling, with animation, of the epic Mahabharata and Ramayana poems, India’s Iliad and Odyssey.

The two have no intention, though, of turning the robots loose to do their own show, even though they expect it’s only a matter of time until someone does.

“We don’t want to go that far,” says Kapur, adding that’s why, unlike some other robot musicians, theirs don’t look anything like people.

“I don’t want it to go humanoid because that’s going too far,” he said. “We’re not trying to replace humans. We’re trying to enhance what humans can do with all this technology on stage.”