“Jang Ki-ha and the Faces 2nd Album Concert”: Korean rock band Jang Ki-ha and the Faces will hold a concert on June 17-19 at Ewha Womans University’s Samsung Hall to celebrate the release of their second studio album. The group ― consisting of Jang Ki-ha on vocal, Jeong Jung-yeop on bass, Lee Min-ki on guitar, Kim Hyeon-ho on drums and Lee Jong-min on keyboards ―, released “Cheap Coffee” through Bungga Bungga Record in 2008 and slowly established its fan base in Hongdae area. Their first album in 2009 sold more than 50,000 copies. Tickets are 55,000 won. For details, call (02) 563-0595. 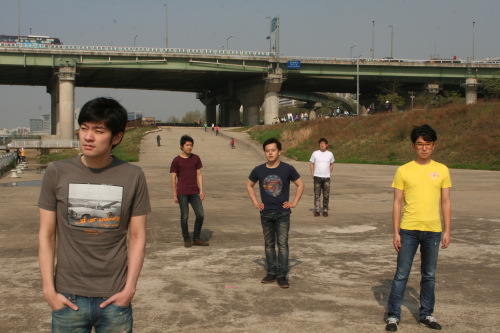 “A Little Closer”: Lena Park, also known as Park Jung-hyun, is soon to stage a five-day solo concert series “A Little Closer,” starting May 17 at the LG Arts Center, aiming to show what a short segment of her performance in MBC’s “I Am a Singer” cannot really reveal. She chose LG Arts Center for the concert ― a smaller venue than the Olympic Gymnastics Stadium, as she prefers the quality of musical sounds in a small space to visual effects in a large one, the agency said. Her concert will be held at 8 p.m. on May 17, May 18 and May 20, at 6 p.m. on May 21 and 5 p.m. on May 22. Tickets range from 55,000 won to 99,000 won. Although the tickets are almost sold out, check if there are any canceled tickets. Call (02) 2107-5972.

“Ron Carter: Golden Striker Trio Live in Seoul”: Jazz bassist Ron Carter, pianist Mulgrew Miller and guitarist Russell Malone will hold a trio show at Yonsei University’s Concert Hall on June 21 at 8 p.m. The Golden Striker Trio, set up in 2003, released two albums. Without any drums, their jazz melodies through guitar, piano and bass were praised as masterful and the team received enthusiastic response from the audience at the 2007 Carnergie Hall concert. Ron Carter has participated in more than 3,500 recordings so far. The concert of the Golden Striker Trio will be the first in Korea. Tickets range from 88,000 won to 132,000 won. For more information, call (02) 3143-5155.

“The Exhibition of the Great Portraitist’s Work ― KARSH”: About 100 photographs by the great photographer Yousuf Karsh are on display at Sejong Center for the Performing Arts in central Seoul. Among its three sections ― “Landscape,” “Portraits,” “Hands” ― the “Portraits” division is most notable. Visitors can view portraits of many 20th century icons including Audrey Hepburn, Christian Dior and Elizabeth Taylor. The exhibition runs through May 22. Tickets range from 6,000 won to 9,000 won. For more information, call 1544-1681.

“Abstract it!”: The National Museum of Contemporary Art, Deoksugung, central Seoul, is holding a special exhibition introducing 93 abstract artworks by 71 artists, both from Korea and overseas, including Kim Chang-ryeol, Park Seo-bo, Lee U-hwan, Marcel Duchamp, and Louise Bourgeoise. The selected works range from early 20th century Korean modern paintings to abstract works of the 1960-70s as well as contemporary art. The exhibition runs through May 22. For more information, call (02) 2188-6000 or visit www.moca.go.kr. 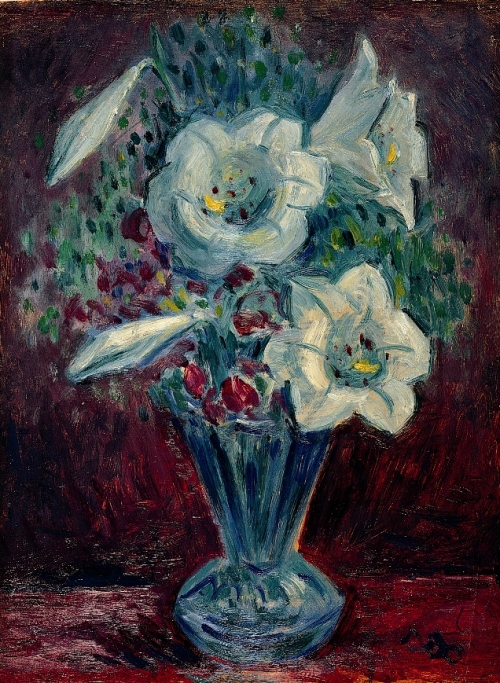 “Flower” by Koo Bohn-woong at the exhibition “Abstract it!” which runs through May 22 at the National Museum of Contemporary Art, Deoksugung, in central Seoul. (National Museum of Contemporary Art)
“Korean Rhapsody: A Montage of History and Memory”: Korea’s restless modern history unfolds at Leeum, Samsung Museum of Art in Hannam-dong, southern Seoul, in the form of paintings, photographs, installations and media works. The exhibition displays 80 historical documents and artworks that reflect crucial moments in Korea’s painful but dynamic past. While staying within the theme, the exhibits are of very high quality, created by renowned local and foreign artists. The exhibition runs until June 5. Tickets range from 4,000 won to 7,000 won. For more information, call (02) 2014-6900 or visit www.leeum.org.

“Senile Lines”: Franois Morellet, known as the master of geometrical abstract art, is holding his 456th solo exhibition at Gallery Hyundai in Sagan-dong, central Seoul. He is one of the most spotlighted artists in France right now. The Louvre Museum in Paris commissioned Morellet to make a permanent installation work for the museum last year and Centre Georges Pompidou is holding his retrospective exhibition. The exhibition runs through June 19. For more information, call (02) 2287-3500 or visit www.galleryhyundai.co.kr.

“Ten Thousand Waves”: “Ten Thousand Waves,” a 55 minute long video work by Isaac Julien is on show at Atelier Hermes. Julien is a media artist from Britain. The video work first opened to the public as a nine channel video in 2010 Sydney Biennale, but is changed into a three-channel version for this showcase. Familiar faces like Maggie Cheung and Zhao Tao appear in the film. The exhibition runs through July 17 at Atelier Hermes in Sinsa-dong, southern Seoul. It is located on the third floor of Maison Hermes Dosan Park. For more information, call (02) 544-7722.

“2011 Green Plugged Seoul”: Eco-friendly music festival “2011 Green Plugged Seoul” will rock out at Nanji Han River Park on May 14-15. The park is right next to the Han River, making for a perfect outdoor venue for revellers. Popular rock bands including Jaurim, Boohwal, Norazo and YB, as well as pop singers such as K. Will, are scheduled to join the festival. From overseas, Paris Match, SARA from Japan, Lasse Lindh from Sweden and Juris from the Philippines will also take the stage. The festival’s theme T-shirts and bags will be sold in the limited quantity of 500 items, each, during the festival. A one-day pass is 55,000 won and two-day pass 88,000 won per person. Passes are available on www.yes24.com. For more information, visit www.greenplugged.com. 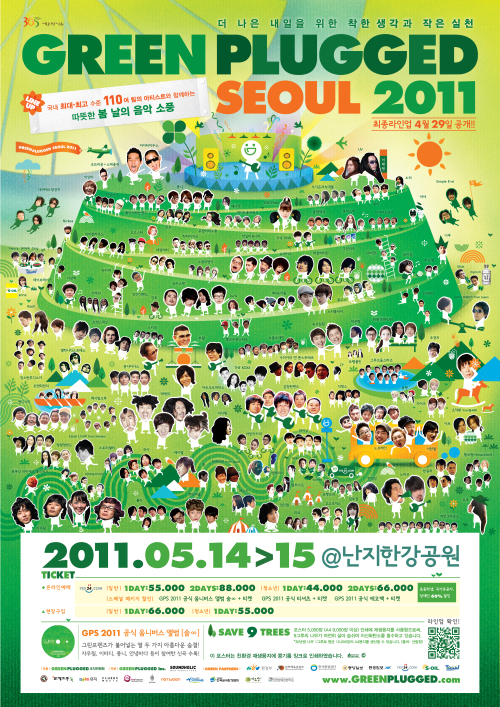 “Uijeongbu International Music Theater Festival”: Under the slogan “are U ready?,” the Uijeongbu International Music Theater Festival kicked off on May 10 and runs through May 28 at various performance venues including Uijeongbu Arts Center in Uigeongbu, Gyeonggi Province. The major theme this year is minority. From traditional music theater performance to pop concerts, the festival offers a diversity of theater and music performances coming from six countries including France, Israel and the United States. Anthony Brown’s art pieces will be exhibited for children and musical “Radio Star” will be also enjoyable. Call (031) 828-5892.

“Seoul Spring Festival of Chamber Music 2011”: The Sixth Seoul Spring Festival of Chamber Music has kicked off on May 10 and will run through May 22 at Sejong Chamber Hall, Seoul Arts Center and Hoam Art Hall. Honoring piano and keyboard instruments with the bicentenary anniversary of Franz Liszt’s birth, the festival will offer many chamber music and solo works by Liszt. Under the theme “Pianissiomo,” the festival introduces “Fortepiano,” the father of the modern piano. Participating artists include artistic director and violinist Kang Dong-suk, pianist Pascal Devoyon, violinist Baek Ju-young, pianist Lee Dae-uk and cellist Yang Sung-won. There will be a free concert on May 15 at Deoksu Palace, with conductor Ralf Gothni and Gangnam Symphony Orchestra performing Mozart, Dvorak and Liszt Piano Concerto with pianist Kim Young-ho. For more information, visit www.seoulspring.org.

“Les Petits Chanteurs de Saint-Marc Recital”: The Little Singers of Saint Marc, as the choir is known in English, is to tour to give Korean audiences a flavor of the 2004 French hit film “The Chorus”. Founded in 1986, the choir recorded the entire soundtrack of the film nominated for an Academy Award in the Best Foreign Language Film category in 2005, with the song “Look to Your Path” earning a nomination for Best Song. The choir will perform in Gyeongju on May 17, Ulsan on May 18, Busan on May 19 and Yongin on May 21. Tickets range from 33,000 won to 88,000 won. For more information, call (02) 597-9870.

“Paik Kun-woo, and Liszt”: Maestro Paik Kun-woo is to hold a rare “Paik Kun-woo, and Liszt” piano recital to celebrate the 200th year of the composer’s birth, covering almost all of Liszt’s pieces in two concerts on June 19 and June 26 at Seoul Arts Center’s Concert Hall. The two programs are similar to Paik’s “all-Liszt” programs in Paris in 1982. The eight works of the June 19 program includes “La Vallee d’Obermann,” from the “Annees de Pelerinage,” “Consolation Nr. 3 in D Flat Major,” “2 Legendes,” “Mephisto Waltz No. 1.” On June 26, the program of Liszt’s late works will include “5 Hungarian folk songs,” “La Lugubre gondola II,” “Romance,” “Scherzo und Marsch,” “Sunt Lacrymae Rerum,” “Sursum Corda” and Sonata in B minor. “Paik Kun-woo, and Liszt” will be held at Seoul Arts Center’s Concert Hall at 8 p.m. on June 19 and 25. Tickets range from 40,000 won to 120,000 won. For details, call (02) 318-4304. 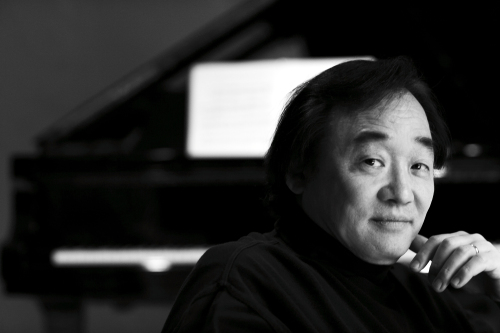 Pianist Paik Kun-woo is to hold Liszt recital at Seoul Arts Center on June 19 and June 26. (Credia)
“Ennio Morricone 50th Anniversary Live”: The Academy Award-winning film nscore composer Ennio Morricone is to hold his 50th anniversary live concert in Seoul from May 16-18 at Sejong Center for the Performing Arts at 8 p.m. The program will include his representative songs such as “Gabriel’s Oboe.” Tickets range from 40,000 won to 220,000 won. For more information, call (02) 399-1114~6. For English booking, call (02) 332-3277.

“Barbie at the Symphony”: Conductor Arnie Roth and Ditto Orchestra will hold the “Barbie at the Symphony” concert at the Sejong Center for the Performing Arts on May 15 at 2 p.m. and 6 p.m. The concert will offer representative classical music repertoires featured in the animation movie “Barbie Princess.” The program includes Tchaikovsky’s “Swan Lake,” “The Nutcracker,” Beethoven’s Symphony No. 6, Drorak’s Symphony No. 9 and Mendelsshon’s Symphony No. 4. Tickets range from 30,000 won to 80,000 won. For details, call (02) 318-4301.

“Dance-X: Tokyo-Seoul-Montreal”: After a successful show in Tokyo, the three-nation modern dance project “Dance-X: Tokyo-Seoul-Montreal” has arrived in Seoul. It will showcase Maki Morishita’s “Tokyo Flat,” In Jeong-ju and Park Neongkul’s “Transforming View” and Erin Flynn’s “From Ashes Comes the Day.” The show runs through Sunday at LIG Art Hall in Yeoksam-dong, southern Seoul. Admission is 30,000 won. For more information, call 1544-3922 or visit www.ligarthall.com.

“CONVERDANCE”: Korea National Ballet will present a show composed of different genres such as modern ballet, swing dance and play all merged together. The show offers the chance to see ballet dancers’ more rhythmic and dynamic moves. The show runs from May 20 to 21 at Doosan Art Center’s Yongkang Hall in Yeonji-dong, central Seoul. For more information, call (02) 587-6181 or visit www.kballet.org.

“Varekai”: Canadian troupe Cirque du Soleil will perform “Varekai” through May 29 at the tent of the Big Top Theater in Jamsil Sports Complex, southern Seoul. The show is about a story of Icarus from Greek mythology. Tickets range from 60,000 won to 220,000 won. The 220,000-won “Tapis Rouge” ticket includes a VIP lounge service and souvenirs such as a program and CD. For more information, call (02) 541-6235 or visit www.varekai.co.kr.

“This is Modern 2”: Universal Ballet will present a wide range of modern ballet including legendary choreographer Jiri Kylian’s “Petite Mort” and “Sechs Tanze” and Korean choreographer Hue Young-soon’s “This is Your Life.” The show will run from June 9 to 12 at Universal Art Center in Neung-dong, eastern Seoul. Tickets range from 10,000 won to 70,000 won. For more information, call 070-7124-1737 or visit www.uac.co.kr. 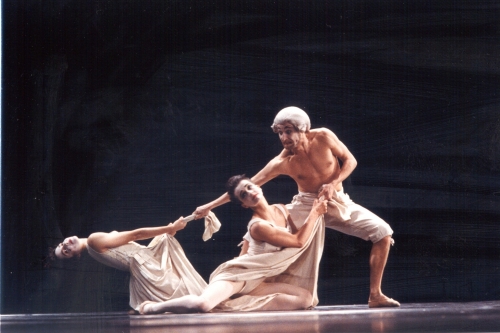 A scene from “Sechs Tanze,” one of the dances to form part of “This is Modern 2” from June 9 to 12 at Universal Art Center (Universal Ballet)