[ The Korea Herald – Send E-mail ]
Federer stunned, Nadal shrugs off fever in Rome
By 이현주
Published : May 13, 2011 - 18:53
Updated : May 13, 2011 - 18:53
ROME (AFP) ― Roger Federer’s French Open problems piled up on Thursday when he was dumped out of the Rome Masters by Richard Gasquet but world number one Rafael Nadal shook off a fever to make the quarterfinals.

World number three Federer went down 4-6, 7-6 (7/2), 7-6 (7/4) in the third round to Frenchman Gasquet, a worrying setback less just 10 days before the start of Roland Garros, the second Grand Slam of the season.

Nadal, the defending French Open champion, quickly put behind him what he described as his worst clay performance in memory on Wednesday to streak into the quarterfinals with a 6-4, 6-2 win over compatriot Feliciano Lopez. 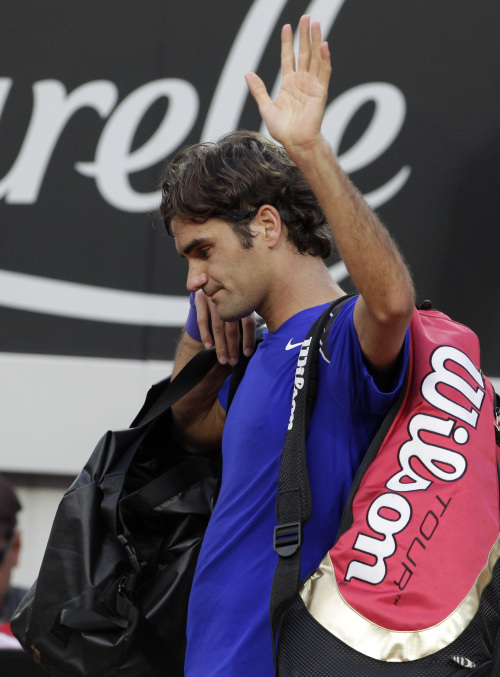 Federer broke Gasquet in the seventh game of the first set before serving it out and when he broke again in the fifth game of the second, it looked like he would be in for a short afternoon.

But Gasquet fought back in the eighth game and then took the tie-break.

The decider also went to a tie-break that saw two early mini-breaks apiece before Gasquet took the initiative when Federer missed a backhand.

Leading 5-4 and with two serves to come, Gasquet held his nerve while Federer made errors off both wings to hand the match to the Frenchman.

It was only Gasquet’s second victory against the record 16-time Grand Slam winner in 10 meetings, his first coming in 2005 in Monte Carlo in their first match when he was still a teenager.

“That’s how it goes sometimes, I thought I was playing well and then in the third I wasn’t playing at all, it’s a disappointing match for me,” admitted Federer.

“It was tough to play out there, it was a slippery court. Richard started to play better as the match went on.”

Nadal played much better than in his troubled three-set victory over Italian qualifier Paolo Lorenzi on Wednesday insisting that his poor form had been due to a fever and not the pressure of having lost last week’s Madrid final to Djokovic.

“I had a fever last night and this morning I didn’t feel perfect. Before the match I didn’t know if I could go on court,” he said.

“I had a practice at 11:30 a.m. for just 15 minutes to see how it went and finally I decided to go on court. It worked a little bit better than yesterday.

”The last few months have been hard. I certainly didn’t understand very well yesterday (Wednesday) why I felt that slow and without energy. I understand better today.”

Having given up an early break, Nadal took the first set when Lopez played a sloppy service game at 4-5, a poor drop-shot into the net bringing up 0-40 and three set points to Nadal, who took the first with a rasping backhand passing shot.

Nadal then broke him twice in the second set as Lopez paid for his 30 unforced errors during the match.

In the women’s event, world number one Caroline Wozniacki of Denmark enjoyed a relatively trouble-free night as she overcame Yanina Wickmayer of Belgium 6-1, 7-6 (7/4).

French Open champion Francesca Schiavone showed her mettle as she came back from a set down to beat Daniela Hantuchova 3-6, 6-2, 7-5 to reach the quarterfinals for the fourth time, but first since 2005.