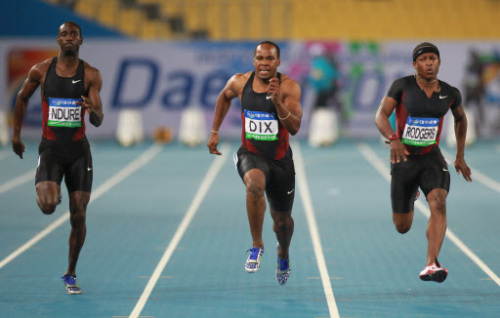 The 25-year-old came in at 10.00 seconds to beat fellow American runner Mike Rodgers by 0.03 seconds at the Colorful Daegu Pre-Championships Meeting, a test event ahead of the 2011 World Championships in Athletics. Dix won the bronze medal in both the 100m and 200m races at the Beijing Olympics in 2008 and has a fast personal best of 9.88 seconds from 2010.

In the women's 100m event, American Carmelita Jeter won for the third straight year with 11.09 seconds, nudging her compatriot Lashaunte Moore, who came in at 11.27 seconds. Jeter's personal best was 10.64, set in Shanghai in 2009.

The biennial world championships, run by the International Association of Athletics Federations (IAAF), will take place from Aug. 27 to Sept. 4 here, about 300 kilometers southeast of Seoul.

It will be Korea's first athletics championships, and organizers expect about 4,000 athletes, officials and journalists to attend.