The survey was conducted on 702 office workers in their 20s and 30s by Job Korea, a career website. The survey asked respondents about the importance of mentors and what kind of mentors they thought were ideal.

Men in their 20s and 30s answered that cool-headed and objective mentors able to give honest but critical remarks were ideal. Women, on the other hand, said mentors who were comfortable to be with were ideal mentors. 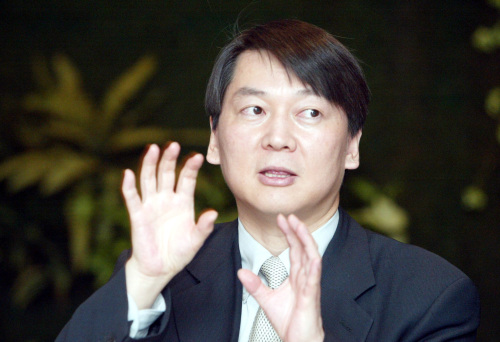 Ahn Chul-soo (The Korea Herald)
Ahn was picked as the most ideal kind of mentor out of local public figures with 17.2 percent of respondents voting for him.

In an AM Academy lecture on May 9, Ahn criticized how Korean society revolved around conglomerates.

“The nation’s support of conglomerates under the belief that these giant companies will lead economic growth has only abetted in small- and medium-sized companies being pillaged,” he said.

Ahn is a founder of one of Korea’s first-generation IT companies, AhnLab, a computer vaccine-developing agency founded in 1995. AhnLab pioneered the development of computer vaccine programs and provided consulting services for internet security during the 1990s.

Ahn, a researcher-turned-professor, is soon to move from his post at KAIST to Seoul National University. Ahn accepted the position offered by the Graduate School of Convergence Science and Technology at SNU as a professor. Ahn is to begin teaching in June.

Ahn graduated from Seoul National University with a bachelor’s degree in medicine and also received a Ph.D. from SNU medical school. While serving as chief executive at AhnLab, he resigned to study business at the University of Pennsylvania’s Wharton School. He also completed a venture business program at Stanford University.