With less than two months to go before the host of the 2018 Winter Olympics is decided, Pyeong-Chang has received high marks for its campaign in an International Olympic Committee evaluation report.

The report described PyeongChang’s plan as a “very compact concept” and that it could become a springboard to develop winter sports in Asia.

“The commission believes the legacy from a 2018 PyeongChang Games, building on existing legacies from previous Olympic Winter Games bids, would be significant to further develop winter sport in Asia,” the report read.

PyeongChang’s plan is to run the Olympics in two major clusters: the Alpensia Cluster, around the Alpensia Resort, which would host snow events and also the sliding sports, and the Coastal Cluster, in Gangneung, which would stage ice events. 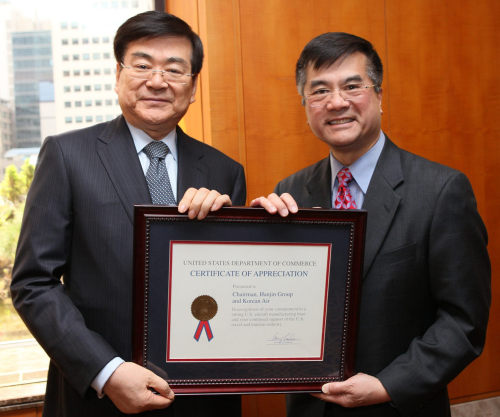 PyeongChang bid chief Cho Yang-ho (Yonhap News)
“PyeongChang presents a very compact concept and its multi-modal transport network would ensure short travel times for athletes and other client groups both within and between the two zones,” the report said.

It also highlighted that PyeongChang surpassed its rivals in opinion polls of residents with 92 percent of city locals and 87 percent of Koreans in favor of hosting the Winter Games.

But the Evaluation Commission concluded that “all three candidate cities could successfully host the 2018 Olympic Winter Games,” noting that each city’s concept offered a viable option to the IOC.

“We are particularly delighted that the report praised PyeongChang’s efficient and compact Games plan, and the IOC has acknowledged that we have kept our promises and developed a sports resort tailor-made for the Winter Games,” Cho said in a statement.

Looking to banish the memory of two previous failures, PyeongChang is bidding against Munich, Germany, and Annecy, France, for the 2018 Winter Olympics. The host city will be selected by secret ballot at the IOC executive board meeting in Durban, South Africa, on July 6.

The commission’s report will now be given to the IOC members before their meeting in Lausanne next week.

The IOC briefing will be the first opportunity for PyeongChang to present its campaign directly to the 103-member IOC committee, which will vote in July to decide the host for the 2018 Winter Games.

“We are looking forward to the final presentation and bringing our ‘New Horizons’ story and our compelling proposal to life ahead of the vote” Cho said.

“We are confident that PyeongChang would deliver an unforgettable Olympics and Paralympics that have the power to inspire a new generation of winter sports athletes and provide a platform for winter sports to grow and thrive in new areas of the world.”