Shinsuke Sugiyama, Tokyo’s delegate to the stalled multilateral talks, however, said such inter-Korean talks should not pass off as a formality, stressing the North should make a series of denuclearization steps to show its commitment to the cause. 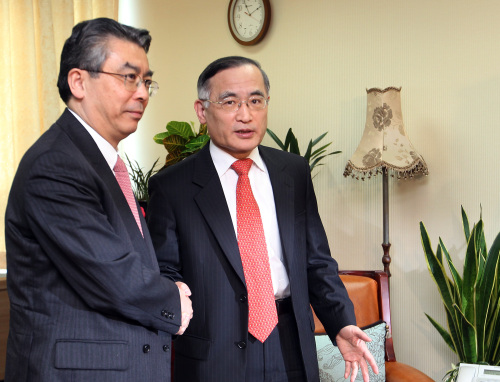 Seoul’s chief nuclear envoy Wi Sung-lac (right) shakes hands with his Japanese counterpart Shinsuke Sugiyama before their talks at his office in central Seoul. (Yonhap News)
Sugiyama made the comments to reporters after his meeting with his South Korean counterpart Wi Sung-lac in Seoul.

The six-party talks, which also group the U.S. and Russia, have not been held since 2008. In 2009, North Korea conducted its second nuclear test, drawing tougher sanctions. The country has since renewed its willingness to return to the six-party talks, but South Korea, Japan and the U.S. remain suspicious of its intent.

In an effort to restart the talks, host China proposed last month that the nuclear delegates of the two Koreas first hold dialogue. The proposal came after Chinese nuclear envoy Wu Dawei met with his North Korean counterpart Kim Kye-gwan in Beijing.

South Korea has agreed to the proposal, but the North has yet to make a formal offer. Pyongyang has long been reluctant to discuss its nuclear arms programs with Seoul, saying they are aimed at deterring a U.S. invasion.

Since the inauguration of a conservative government in 2008, however, Seoul has criticized such a stance, calling on the North to agree to bilaterally discuss the programs that it says constitute a direct national security threat. (Yonhap News)