The pair started dating right after starring together in the MBC drama “Seeking Love,” which ended last January. They are known to have become close while attending the same church after Eugene converted Ki to Christianity. They have been dating for about a year and a half. 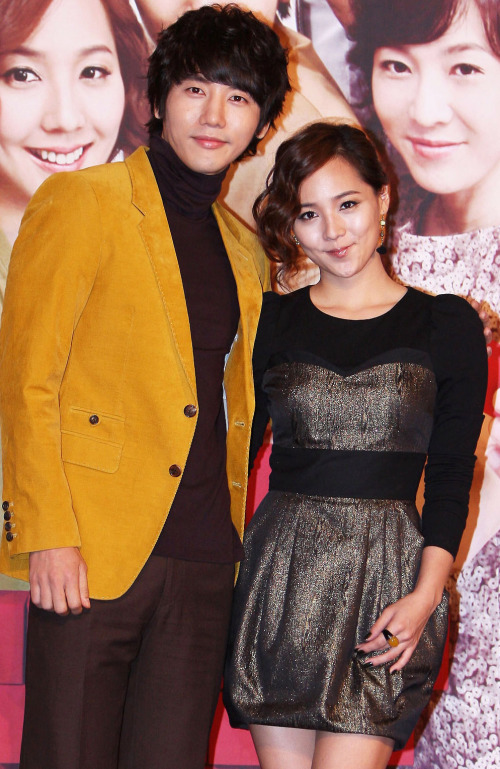 Ki Tae-young (left) and Eugene at a press conference for the MBC drama “Seeking Love” in October 2009. (Yonhap News)
Both announced their news to fans first by writing on their fan club community sites on Wednesday morning.

“There is something that pops up to my mind at the mention of spring ... a May bride. I once dreamed of being a May bride myself, and although I am not going to be one, I am going to be a July bride,” wrote Eugene on her fan club community site.

“‘Seeking Love’ really found love for us. I’m sure you can guess who it is,” added the 30-year-old actress.

Ki directly stated at his fan club community that he was marrying Eugene.

“She is someone that I can live happily with without fighting, and rely on each other when we make a new family and raise children. As you might have guessed, it is Eugene,” said the 33-year-old actor.

Rumors about the two getting married had actually broken in February, but the couple had strongly denied them.

The two apologized to their fans on Wednesday about the incident and explained that they thought it was not appropriate to make such news public at a time when Eugene’s friends were going through trouble. Other members of S.E.S., had recently been bereaved, as Sea lost her mother and Shoo had lost her father in February.

The wedding will be July 23 at a church in Anyang city, Gyeonggi Province. Only family members and a small number of close friends will be invited.