China’s global trade surplus widened to $11.4 billion as import growth fell amid government efforts to cool an overheated economy and exports rose by nearly 30 percent, data showed Tuesday. The gap exceeded private sector forecasts of $5 billion to $10 billion and was a strong rebound after China reported a rare trade deficit in the first quarter of this year.

China’s trade gap has angered Washington and other trading partners who blame currency controls and other policies they say are hampering trade and a global recovery.

At the start of two days of talks in Washington, U.S. Treasury Secretary Timothy Geithner pressed China’s envoys Monday to allow its yuan to rise faster against the dollar. That might help to boost Chinese imports, narrowing the American trade surplus with China, which hit an all-time high last year.

China’s commerce minister, Chen Deming, responded that yuan appreciation was being carried out in a “very healthy manner.” He said the United States needed to change its policies on high-tech sales and investment to spur American manufacturing. 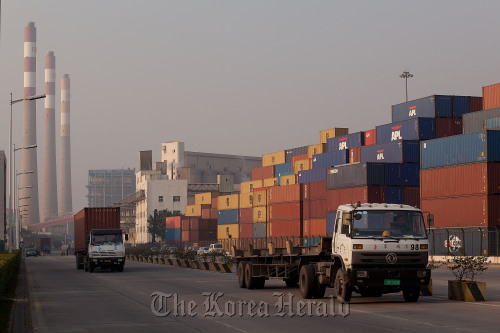 Truckers drive past stacks of transport containers at Chiwan Container Terminals, Port of Shekou in Shenzhen, Guangdong province, China. (Bloomberg)
Beijing has allowed the yuan to rise about 5 percent against the dollar since it promised more exchange rate flexibility last June but American manufacturers and others say the currency still is undervalued. The yuan’s link to the dollar means it has declined against the euro as the American currency weakened over the past year.

China’s April trade surplus with the U.S. rose 52 percent over a year ago to $15.1 billion. The gap with the European Union, China’s biggest trading partner, narrowed slightly to a still large $10.3 billion.

The country’s global trade gap, up from just $1.7 billion in April 2010, reflected a slowdown in demand for imports as Beijing tries to cool an economy that grew by a rapid 9.7 percent in the first three months of this year.

China’s trade surplus usually narrows early in the year as manufacturers restock following the Christmas export rush. This year’s decline was unusually large due to high prices for oil and other commodities.

China recorded a trade deficit for the first three months of 2011 and a surplus of just $140 million for March.

Still, analysts expect China to show a global trade surplus for the year of $160 billion to $200 billion. Last year, China ran a trade surplus of about $16 billion a month.

Regulators have tightened curbs on lending and investment to rein in a boom that has driven demand for imported iron ore, oil, machinery and other goods.

The wider trade surplus suggests Beijing is making only limited progress in efforts to rebalance China’s economy away from reliance on trade and investment by boosting domestic consumption.

High commodity prices also have depressed Chinese demand. Crude oil imports for the first four months of this year fell 9.1 percent from the same period of 2010 despite growth in auto sales.