LONDON (AP) ― Two major credit agencies signaled their concern about Greece’s massive debt on Monday, lending new credence to the view that European authorities must do more to help the country a year after it barely avoided bankruptcy with a bailout.

Experts from the European Union and the International Monetary Fund were in Greece on Monday to check up on economic reforms the government promised to make in return for 110 billion euros ($160 billion) in rescue loans last year. They were also examining whether the current bailout is enough so Athens can stand on its own feet again when the loans run out in 2013 ― a scenario most investors think is unlikely.

Credit rating agency Standard & Poor’s cut Greece’s bond grade further into junk status Monday, saying was increasingly likely that Greece would be given more time to repay its bailout loans and that Greece would negotiate a similar deal on bonds held by commercial investors.

S&P, which downgraded the long-term bonds to “B” from “BB-,” said Greece might eventually have to resort to a partial default, reneging on as much as 50 percent of its debt. As a result, the agency said it could downgrade Greece again in coming months.

Also Monday, ratings agency Moody’s said it had placed Greece’s credit rating on review for a further possible downgrade, citing the “increased uncertainty about the sustainability of Greek sovereign debt.”

Greece’s government called the downgrade “not justified” and based largely on “market rumors and press reports,” while Socialist Prime Minister George Papandreou lashed out at investors who he said were betting on Greek default. 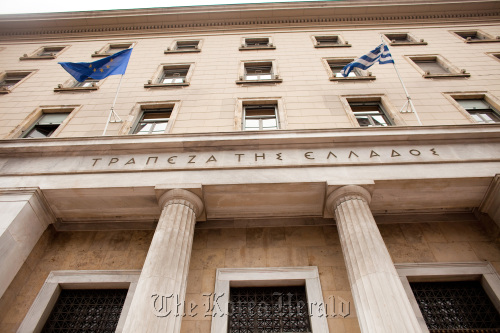 Greek and European Union flags fly outside the Bank of Greece headquarters in Athens. (Bloomberg)
“Credit default swaps are traded without any transparency and are threatening to bring down entire countries and entire societies,” Papandreou said. “They are betting on our bankruptcy and the breakup of the euro. But their effort is in vain.”

Although Greece has enacted stringent austerity measures, started reforming the economy and announced a 50 billion euros ($73 billion) privatization program, improvements to public finances are slowing down.

In particular, the government is having trouble raising revenue through taxes as the country remains in recession. The upshot is a financial shortfall estimated at some 30 billion euros ($44 billion) over the coming years.

“It had already become apparent that Greece probably cannot meet its debt obligations over the next couple of years without further assistance,” said Jane Foley, senior currency strategist at Rabobank International.

“Rather than return to the market next year as the original bailout has assumed, it now seems fairly likely that Greece will instead ask for more funds from the EU,” she said.

The trigger to further action will likely be June, when the EU/IMF appraisal is reported.

“Then we will evaluate those results,” Martin Kotthaus, spokesman for German Finance Minister Wolfgang Schaeuble, said when asked about additional help for Greece.

“We think that Greece does need a further adjustment program,” said Juncker, who also chairs meetings of the eurozone’s 17 finance ministers. Trichet on Monday expressed muted agreement with that position.

Still, an EU official said Monday that more help or easier bailout terms for Greece were far from a done deal. The official was speaking on condition of anonymity because of the sensitivity of the matter.

At the meeting, Greek Finance Minister George Papaconstantinou was told his government needed to “step up” efforts to deliver the reforms promised for the bailout, the EU official said.

If Greece wanted to borrow money over ten years right now, it would have to pay a staggeringly high interest rate of more than 15 percent to get investors to part with their cash. For two-year bonds, interest rates are even higher ― above 25 percent.

That’s unsustainable and compares with the 2 percent to 3 percent rates that Germany would have to pay ― an incredible difference between countries that use the same currency and operate under the same monetary policy.

Papaconstantinou has already urged his country’s international creditors to ease the terms of Greece’s bailout by lowering the loans’ interest rates and extending the repayment period.

But most analysts believe that another bailout would just be another short-term solution. A debt restructuring ― voluntary or involuntary ― could be more efficient, but bondholders would have to give Greece more time to repay or accept that their bonds don’t have the same value as when they bought them.

So far, European officials have vehemently denied that a restructuring is on the cards before 2013, when a new crisis fund kicks in, let alone being discussed. However, investors are skeptical of such denials because EU officials have made stunning U-turns during the past year’s crisis.

The markets are clearly of the view that Greece will have to restructure its debts in some form or another ― the yield on the 10-year bond was up another 0.11 percentage points at a staggering 15.62 percent on Monday.

“The chain of events is increasingly proving the limits of the EU’s muddle-through strategy,” said Christian Carrillo, an analyst at Societe Generale.