Lee Hoi-chang, leader of the conservative minority Liberty Forward Party, has turned in his resignation in the hope of overcoming the party’s prolonged political stagnation.

“I am stepping down to give way to changes in our party,” Lee said in the Supreme Council meeting held on Monday morning.

“Political circles are undergoing sweeping changes and the LFP needs to embrace them in order to survive.”

The senior lawmaker has led the party since February 2008.

Lee also suggested that the party organize an emergency steering panel to fill in for him until new leadership is selected.

The party decided to switch its Supreme Council to an emergency panel and make its head, Rep. Byun Ung-jun, the panel chairman, according to officials.

Lee also stressed the importance of achieving unity in Chungcheong Province, a major stronghold for the LFP.

“We cannot help but lose ground in the upcoming general and presidential elections unless we firm up our identity as a major conservative opposition party,” he said. 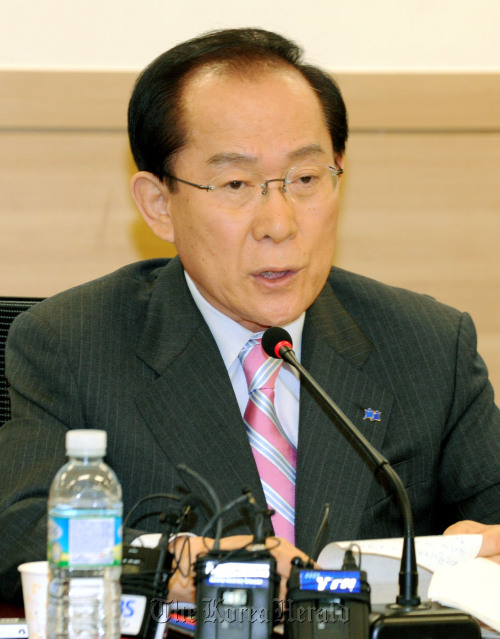 Rep. Lee Hoi-chang, leader of the minority conservative Liberty Forward Party, announces his resignation during a party meeting on Monday. (Yang Dong-chul/The Korea Herald)
“For this, we first need to bring the Chungcheong area together as one.”

Lee’s resignation comes as winds of change are blowing across the nation’s political landscape. This is especially true for the ruling Grand National Party, which suffered a devastating blow from last month’s by-elections.

Observers say that both ruling and opposition camps seem unsure of their prospects in general and presidential elections next year unless they change.

Though the heaviest blow fell on the GNP, the LFP also was shaken by the election results, especially in the Chungcheong region.

The relatively new LFP earned a considerable reputation in the 18th general elections in 2008 by carrying 18 parliamentary seats within two months of its foundation.

However, its internal unity and external influence has fallen sharply over the years as it broke down into factions.

Some observers even referred to Lee’s long-lasting leadership as a double-edged sword: efficient in times of crisis, but also dictatorial.

Upon resigning, Lee also hinted at a possible coalition with the People First Union, another conservative minority party founded by Rep. Sim Dae-pyung, who broke away from the LFP soon after Lee took office.

“As the party leader, I take full responsibility for the in-party division which led Rep. Sim to break away,” Lee said.

As Sim has often agreed that a grand alliance is needed in the Chungcheong region, Lee’s words gave rise to a possibility of a merger between the two parties within the year.