Just as Samsung Electronics chairman Lee Kun-hee has started to show up at Samsung offices on a regular basis, the group’s art sector is getting ready to engage more in the local art scene.

Rodin Gallery, one of the three art museums run by Samsung, reopened with a new name, PLATEAU, last week in its original place in Taepyeongro, central Seoul. It unveiled a new exhibition after a three-year hiatus.

Because it holds French sculptor Auguste Rodin’s masterpieces “The Gates of Hell” and “The Burghers of Calais,” the gallery went by the name Rodin Gallery since its establishment in 1999. Last week at the reopening ceremony, however, it unveiled ambitions to become more involved in hosting contemporary artworks.

“Inspired by the geological terminology ‘plateau’ which denotes highland or sedimentary layer, we plan to make PLATEAU a ground where the art historical achievements of the past meet with artistic experiments of the present and the future,” said Hong Ra-young, deputy director of Leeum, Samsung Museum of Art, at the opening ceremony of Plateau last week. 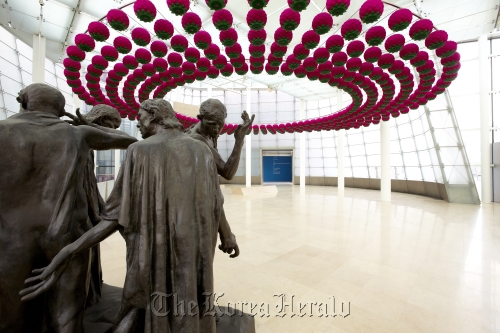 Including Ho Am Art Museum, which has been continuing its rather uneventful management in the past few years, all of Samsung’s art museums have finally recovered from the aftermath of the Samsung scandal in 2008. The scandal resulted in a three-year suspended jail term for Lee for tax evasion. Subsequently, the Samsung museums stopped holding new exhibitions.

The return of new displays at Samsung’s art museums is creating excitement among local art aficionados as the museums are considered some of the best in South Korea, backed by a strong financial base and impressive art collections.

Major international art museums and galleries are eager to work with them, including the Metropolitan Museum of Art in New York which is currently holding the exhibition “Poetry in Clay: Korean Buncheong Ceramics from Leeum, Samsung Museum of Art.”

Art insiders are hoping that the return of Samsung to the art scene will help promote art to the public and eventually contribute to reinvigorating the local art market.

The reopening show at PLATEAU is titled “Space Study,” reflecting the gallery’s efforts to shed new light on its space which had been kept relatively vacant during the exhibition vacuum.

It features 38 installations, sculptures, photos and videoworks by 14 established Korean artists including Kimsooja, Lee Bul, Park Junebum, Sasa[44] and Kim In-sook who interpreted the space in their own ways.

Kimsooja modified her site-specific installation work “Lotus: Zone of Zero” to fit into the glass pavilion of PLATEAU’s main gallery. Bright pink lotus lanterns, 384 in total, hang in six layers of circles from the ceiling of the room where both of Rodin’s sculptures are on permanent display.

Gregorian, Tibetan and Islamic chants are simultaneously echoed in the room, adding to the peculiar vibe of various cultures and genres being mixed together.

Sasa[44] wrote “107 Numbers and 4 Words” on a wall in the gallery, which are numbers and words related to various historical incidents from 1999, the year Rodin Gallery opened, to the present. The artist chose sky blue as the backdrop color of the wall, based on the album cover color of installation artist Ono Yoko, whose solo show attracted the largest crowd in the gallery’s history.