No compact cars were included in the list of top 10 most fuel efficient models for the first time after Hyundai Motor Group’s Sonata, K5, and Volkswagen’s Jetta BlueMotion joined the race this month ― your bigger and more powerful options.

Toyota Prius Hybrid has been retaining the top spot with capacity to run whopping 29.2 kilometers per hour, but other compact models which were once rated highly for their light weight have been replaced with mid-sized cars.

The hybrid Sonata and K5, on sale from this month, are their first gasoline-electric hybrids capable of pulling 21 kilometers each. The mid-sized vehicles are ranked 9th and 10th on the list, replacing compact models, according to Korea Energy Management Corp.

The two models are fitted with the newly developed 2-liter Nu engine which allows 150 brake horsepower and a 30-kilowatt electrics. 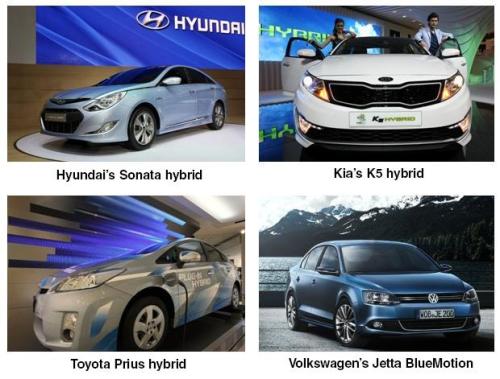 Hyundai and Kia said the vehicles’ electric motors are 18 percent smaller and 30 percent lighter than those of their rival models using the similar technology.

Their clutch is designed in such way that uses both the engine and the electric motor especially when the car is travelling uphill or on highways.

Though a sub-compact, Volkswagen’s newly released Jetta Diesel is also a spacious option for those looking for fuel efficient cars. Jetta 1.6 TDI BlueMotion, a sedan version of Golf, its earlier model, is equipped with engine that automatically shuts down when the car is idle and restarts as soon as the accelerator is pushed.

Hybrid cars are about 20 percent more expensive than other gasoline cars but eco-friendly diesel cars cost about the same as other diesel models.

While demand for fuel efficient cars is on the rise, discrepancies in government subsidies have caused controversy.

“It isn’t fair that the government only gives tax benefits to hybrids when eco-friendly diesel models are just as fuel efficient both in the city and on highways,” said Park Dong-hoon, president of Volkswagen Korea

The government currently offers a 3.1 million won tax exemption for buying hybrid types, while it offers none for buying diesel cars that are just as eco-friendly.