Like many other sports fans, Lim Sang-hyun, a 31-year-old office worker living in Seoul, was excited to hear that a new marina had opened on the Han River near the National Assembly last month.

Although he spends practically all of his winter vacations skiing, he was looking for a summer water sport to immerse himself in during his summer holidays, hopefully not too far away from the city, he said.

“I have always been interested in yachting but never had a chance to learn it. I am definitely going to check out what the new marina has to offer,” said Lim.

The marina, which can accommodate 90 yachts, is the 12th of its kind in South Korea and the third biggest, following Suyoungman Yacht Marina in Busan and Jeongok Port in Hwaseong, Gyeonggi Province.

Seoul Marina, a private enterprise, built the club at a cost of 2.7 billion won ($2.5 million). After running it for 20 years, it will be donated to the city.

Popularization of yachts to begin on Han River

Many sports fans would be disappointed, and officials at Seoul Metropolitan City not be too proud, if it were expensive to enjoy yachting on Han River.

Do not worry if you do not have your own pricy yacht ― many clubs, including Seoul Marina, rent them out for a reasonable fee. 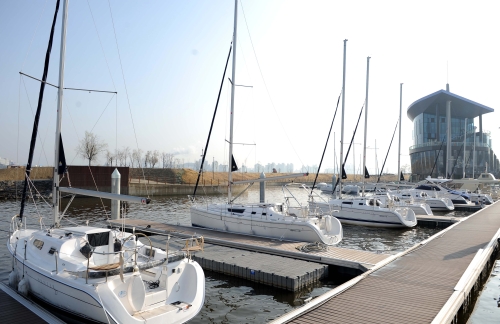 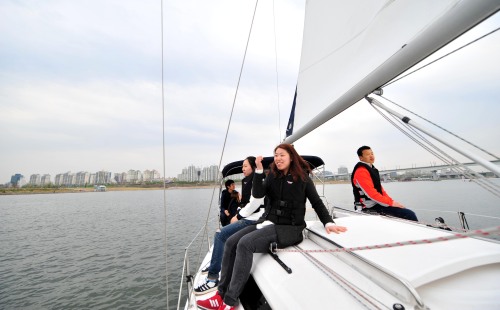 A group enjoys yachting on Han River. (Kim Myung-sub/The Korea Herald)
Seoul Marina Club & Yacht is aiming to break the image of yachting as a luxurious sport. A dinghy only costs 4,000 won for an hour, which is only about one fifth the price of a swan-shaped pedalo. The pedalos cost you 20,000 won for a full 40 minutes of exhausting pedaling.

If the price range does not suit you, you can always knock on the doors of several other yachting clubs stationed along Han River. The prices vary according to the club, but are normally a little bit more expensive than Seoul Marina Club & Yacht: about 7,500 won for an hour’s dinghy ride and about 26,000 won for a cruiser ride.

There are currently about five yachting clubs and about 127 yachts anchoring along the river. The number, however, is expected to shoot up to about 300 by October when Gimpo Marina, which will host 120 yachts, is constructed and Ara Waterway is completed. Ara Waterway will connect Han River to the Yellow Sea.

The Han River is gaining attention as a good yachting spot, even better than the ocean, because it is accessible and usually has just the right amount of wind.

The river is about 1,100 meters in width and about four to five meters deep, good dimensions for enjoying yachting. Another advantage the river has over The Yellow Sea is that the latter’s big changes in tide make deciding when to sail tricky. Fisheries that are scattered in the sea can be another difficult factor for sailing.

Learn and enjoy it in an easier way

There are several yacht clubs along Han River that offer lessons for all levels.

Lessons range from learning the basic skills such as steering for an hour or two, to high-level techniques that need to be practiced for several months.

Some offer hourly classes but most require annual fees.

Sailing aficionados say it is easy to obtain a yacht license with as much effort it takes to pass the driver’s license test.

“If you get lessons for about two months, you can sail out to Jeju-do on your own,” said a tutor at Korea Sailing Yacht School.

If you are reluctant to actually learn to yacht, there are other ways you can enjoy it.

700 Yacht Club used to run as a private membership club but recently changed its policies to lend their boats to the public. It runs various programs for families, friends and business associates to enjoy a luxurious day ― or evening ― aboard a yacht.

Large boats that accommodate up to 12 persons are popular for family gatherings. Guests usually rent the boat for about an hour and a half and enjoy their private time. If you make a reservation early enough, you can also enjoy a special meal on the boat.

“Many guests have been holding birthday parties on the boat lately. They can enjoy a buffet-style meal or a barbeque party in the club lounge, and then hop on the boat to continue the party,” said an official at 700 Yacht Club.