International literary events can be a great opportunity for writers not only to market their work to new readers, but also to foster creative ideas across borders, languages and cultures.

This year’s Seoul International Forum for Literature is such an event, with writers from across the globe, including Nobel Prize winners Jean-Marie Gustave Le Clezio of France and Gao Xingjian of China, exploring a variety of subjects over three days, starting May 24.

The forum was first held in 2000, inviting world-renowned writers to exchange their ideas and discuss issues facing the world today. The organizer Daesan Foundation also successfully hosted the second event in 2005 in the Korean capital.

This year, the 3rd Seoul International Forum will run at the Kyobo Convention Hall in Gwanghwamun, central Seoul.

Under the theme of “The Globalizing World and the Human Community,” the event will bring the literature heavyweights together to discuss the great role and responsibility of literature in the globalizing world, according to the organizer.

“The forum will provide a chance to explore the various problems of living in a rapidly globalizing world,” said Kim Seong-kon, vice-chair of the Seoul International Forum.

“It will also give Korean authors a great opportunity to communicate and connect with world-leading authors,” Kim said. 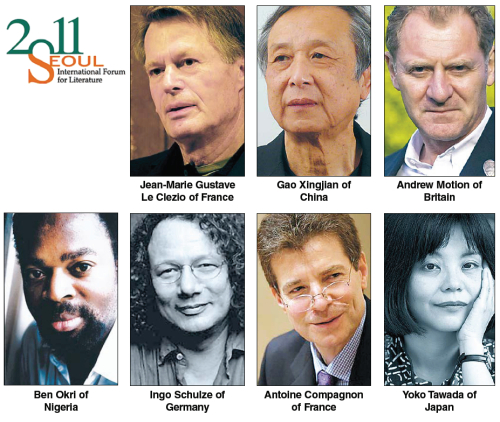 Many Korean authors, such as Shin Kyung-sook, who had an instant U.S. hit with her English-translated book “Please Look after Mom,” last month, are now gaining international recognition.

But Kim said that there was still a big gap between what global readers want to read and what Korean authors want to write.

“It’s important for our writers to have more opportunities to interact with foreign writers, and the Seoul forum will provide the unique chance for them,” he added.

This year the forum will feature about 30 seminars, lectures and discussions with 14 foreign and 32 Korean authors participating.

The main theme will be divided into five subcategories that include, “The Self and the Other in the Age of Multiculturalism,” “Writing in the Globalizing World,” “Literature in the Age of Post-Ideology,” “Writing for the World Market and the Multimedia Environment,” and “Literature and Eco-Criticism.”

French author and professor, Jean-Marie Gustave Le Clezio, the 2008 Nobel Prize laureate and Chinese-born novelist, playwright and stage director Gao Xingjian, who became the first Chinese writer to win the Nobel Prize in Literature in 2000, will each deliver an hour-long lecture on May 24 and May 25, respectively.

Many of the foreign authors coming here write in more than two languages. Japanese writer Tawada, for instance, writes in both Japanese and German, according to Kim

“I believe that the forum will build a bridge between Korean literature and the global scene,” he added.

The 2011 Seoul International Forum for Literature will run from 10 a.m.―6 p.m. Anyone can attend the event, and online reservation can be made by sending an email application to sifl@daesan.or.kr. For more information, visit www.seoulforum.org/2011 or call (02)725-5420.