[ The Korea Herald – Send E-mail ]
Lawmaker calls for active diplomacy over Dokdo
By 천성우
Published : May 5, 2011 - 19:32
Updated : May 5, 2011 - 19:32
For Rep. Park Sun-young, a former constitutional law professor, changing her official domicile to the easternmost island of Dokdo was her way of fighting against Japan’s territorial sovereignty over the rocky islets.

Shortly before the 92nd anniversary of the March 1 Movement, when independent fighters declared independence from Japanese colonial rule, the lawmaker of the conservative minor Liberty Forward Party (LFP) transferred her permanent address from Yeoju in Gyeonggi Province to 30 Dokdo-ri, which belongs to Ulleung Island in the East Sea.

“I changed my family register after brooding over where my roots are based. I am not just an individual, but a citizen of Republic of Korea,” Park told Yonhap News Agency in an interview, referring to South Korea by its official name. “My background also encouraged me to defend the territory as it is defined in the Constitution.”

The 55-year-old was the first South Korean lawmaker among more than 2,000 Koreans who changed their permanent address to Dokdo in protest of Japan’s sovereignty claim to the rocky islets. 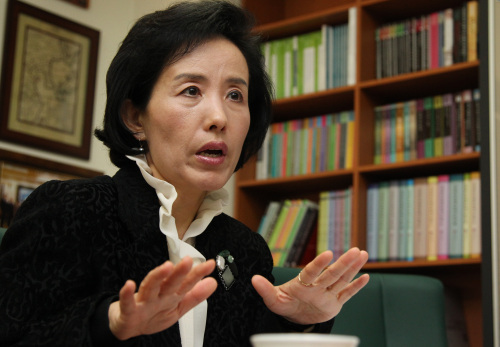 Park Sun-young
Changing legal residence means something to a married woman in her 50s, she says, in a country where the male-dominated family registry system was replaced three years ago with a new one to allow women to have their own register. Her husband, Supreme Court justice Min Il-young, gladly accepted her having an independent domicile where she felt her spiritual home belongs, she said.

“If we do not show a strong will to protect our territory, the situation will get worse. I feel a sense of crisis,” Park said in a high-pitched, clear tone.

After ending her 13-year journalism career at local broadcaster MBC, Park went back to school to earn a doctoral degree from Seoul National University. She taught courses on the Constitution at several universities until she joined the LFP on the representative ticket in 2008. The 16-member party is led by Rep. Lee Hoi-chang, a former ruling party presidential candidate known for his hard-line policy toward North Korea.

The first-term lawmaker is serving on the Committee for Foreign Affairs, Trade and Unification, doubling her role for the Special Committee for Dokdo Protection, a task force team created for the protection of South Korea’s easternmost islets.

The avid advocate for Dokdo says it is time to roll back the Lee Myung-bak administration’s “quiet diplomacy” because the pragmatic strategy aimed at reducing diplomatic conflicts could weaken its sovereignty of the island on the global stage.

“If this case goes to the international court, the government’s quiet diplomacy would signal that we have acknowledged their (Japanese) claims. This is a very serious matter,” Park said, adding that it’s the last thing she wants to see.

Adding to her activism, Park last month proposed a bill expanding the pier facility to accommodate larger vessels and improving medical- and education-related infrastructure that is vital if people are to reside on the islets all year round.

Seoul currently maintains a small Coast Guard on the islets as a show of effective control and there are homes for civilians, but they are not occupied all year round because of tough living conditions.

“The current law is aimed at protecting Dokdo, not for sustainable growth. We have to improve accessibility to allow more visitors there,” she said.

She suggested building a self-propelled floating structure in the nearby sea so as to allow helicopters transport patients in case of emergency. About 132,000 tourists visited Dokdo in 2009, official figures show, while more than 26,000 people have failed to step on the small rocky island due to bad weather.

To discuss measures to better promote Dokdo’s sovereignty, Park had proposed to hold a parliamentary meeting on the islets.

Although the date has been delayed twice last month due to bad weather, another date has been set for the meeting later this month. If weather permits, it will be the first parliamentary meeting held on the islets in the nation’s history.

“Seen from a distance, the island is grandiose. I hope more people can visit Dokdo and see how beautiful it is,” said Park, who says this visit will be the sixth time for her to step on the easternmost territory.

After standing in front of a microphone reading statements for 1,080 days, Park last month changed her title from the longest-serving spokeswoman to her party’s policy director. The untiring politician still stays busy, as widely expected.

“One of the biggest changes is that I don’t get calls after midnight,” Park said. “Outside, I may look like having more personal time, but I am doing my job with long, deep breath to craft policies to improve people’s lives.”

“There are so many issues that we have to pay attention to and feel sympathy to help those who flee their own country to seek freedom and forget about hunger,” said Park. “Descendants born stateless in the process of arriving here are also in need of help.”