A rare double from Anderson after goals from Antonio Valencia and Darron Gibson clinched a 4-1 victory to send United through to its third final in four years with a crushing 6-1 aggregate win.

The May 28 showpiece at Wembley Stadium will pit Europe’s most successful teams of recent years against each other in a repeat of the 2009 final, which Barca comfortably won 2-0 in Rome.

“Barcelona play extremely good football, it’s going to be difficult,” said United goalkeeper Edwin van der Sar, who is set to play his last game in the final before retiring.

The two giants of club football are each targeting a fourth European title. Barcelona reached its third final in six years by beating Spanish rival Real Madrid on Tuesday. 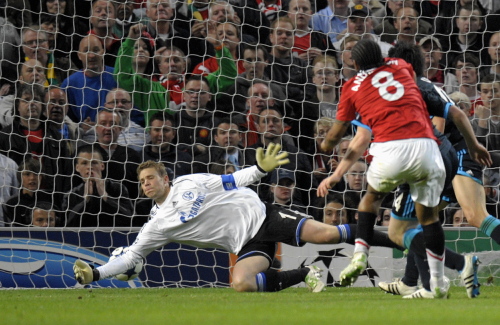 Manchester’s Anderson scores his side’s 4th goal past Schalke keeper Manuel Neuer (left) during the Champions League semifinal between Manchester United and FC Schalke 04 in Manchester, England, Wednesday. (AP-Yonhap News)
The 40-year-old Van der Sar was in the side that produced United’s third European title against Chelsea on penalty kicks in 2008 before they were outclassed a year later.

“We have to make sure we learned our lesson (from 2009), be better prepared and deal with them in a different way,” Van der Sar said. “Hopefully it’ll be a better outcome.”

Barcelona coach Pep Guardiola was at Old Trafford on Wednesday, but few of the players likely to face the Spanish champions at Wembley were in action.

With a 2-0 lead from the first leg and Sunday’s potential Premier League decider against Chelsea looming, United manager Alex Ferguson retained just three players ― including Van der Sar ― from the side that lost at Arsenal at the weekend.

Wayne Rooney and Rio Ferdinand were left out completely, while Ryan Giggs, Nemanja Vidic and Patrice Evra sat on the bench.

“I didn’t sleep last night thinking about it,” Ferguson said of his team selection. “I woke up about four times, picking different teams. But they did me proud.”

United only had one brief scare when Jose Manuel Jurado scored for Schalke. By then, though, United had already stormed into a two-goal lead on the night.

Darron Gibson was among those brought into the United side and he sprayed the ball forward to Valencia with pinpoint precision before the winger clipped the ball past Manuel Neuer in the 26th minute.

Gibson was on the scoresheet himself five minutes later after a blunder that defied Neuer’s current standing as one of Europe’s most sought-after goalkeepers.

Neuer allowed Gibson’s strike from the edge of the penalty area to slip through his gloves into the net.

Just when United was cruising, though, a sloppy pass from Chris Smalling gave the visitors a lifeline, with Jurado scoring for Schalke.

There was a brief delay in the match as attention was averted to the high seating behind the opposite goal where Schalke fans clashed with the United stewards, let off flares and ripped up netting.

But the situation soon calmed down as United enjoyed one of the easiest matches it has played all season.

Anderson was first denied by Neuer’s fingertip save but he ended the night by doubling his United goal tally to four since arriving in 2007, having only scored twice in 125 appearances before Wednesday.

Nani darted down the right and cut the ball back to the Brazilian, who resisted Atsuto Uchida’s challenge and wriggled into space to net in the 72nd.

Again the right flank was the weak point, with Dimitar Berbatov surging forward and squaring to the feet of Anderson, who tapped into the net.

It gave United the biggest victory in a European Cup semifinal since AC Milan beat Real Madrid 6-1 over two legs in the 1988-89 season.

Now United will be returning to Wembley for a continental final for the first time since beating Benfica in 1968 to win its first European Cup. The second was won in Barcelona in 1999 by beating Bayern Munich.