The total number of units sold for the upgraded Galaxy S, serviced by the country’s three telecoms, surpassed 120,000 in only three days, according to industry sources. 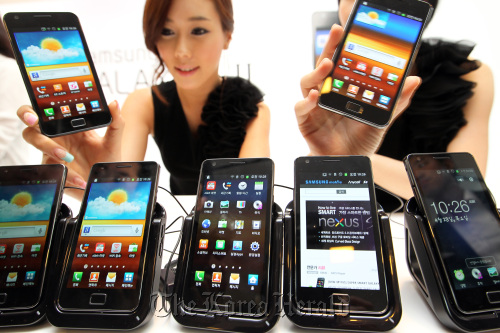 Samsung’s new Galaxy S2 smartphone (Yonhap News)
The figures indicate that a Galaxy S2 was sold every two seconds and that 40,000 of the new smartphones were sold to local consumers every day. The gadget rolled into the market on April 29.

The number is expected to escalate with rumors spreading that the launch of Apple’s new iPhone 5 will be further delayed.

“I got my hands on the Galaxy S2 and it led me to think that Samsung’s Android-powered smartphones have grown enormously over a single year,” said a Seoulite with the surname Woo.

“The sales result is beyond expectations,” said an SKT official, adding that it had estimated that the number of units sold would fall with the participation of other mobile carriers.

Its rivals KT Corp. and LG Uplus also said that features ― such as the navigation function for KT ― had been added to the upgraded model and that the product was well-received by their consumers.

The new Galaxy S2 offers faster services compared to the original Galaxy S when browsing the Internet and playing 3-D games, as well as when handling moving pictures, according to Samsung officials.

The world’s No. 2 mobile manufacturer announced its sales target for the upgraded model was over 10 million units ― a similar level with the previous Galaxy S ― and the company plans to launch the wireless device, which will be serviced by about 140 mobile carriers, in 120 different countries beginning next month.