Finance ministers of South Korea, Japan and China on Wednesday vowed to strengthen the crisis prevention function of the current regional financial safety net of the Chiang Mai Initiative, their joint statement said. 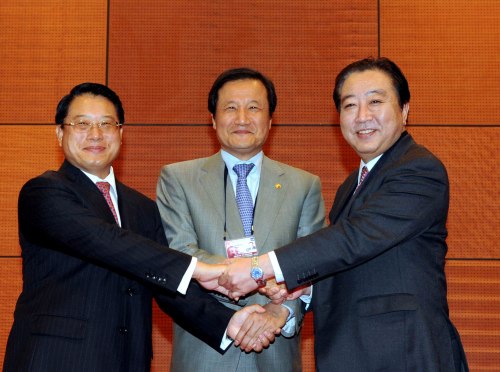 CMIM, in essence, is an Asian version of the International Monetary Fund which was expanded from bilateral swap facility under the CMI since 2000. CMIM differs from CMI in that it is a multilateral agreement that allows more emergency funding for member countries.

It aims to help member countries doomed to experience more capital volatility compared with advanced nations and prevent another case of the 1997-8 Asian Financial Crisis.

“We shared the view that strengthening ASEAN Plus Three Macroeconomic and Research Offices’ surveillance function is an effective tool to prevent a financial crisis in the region and a key element to avoid moral hazard,” said the statement released after the meeting.

AMRO, starting this month, will serve ASEAN Plus Three nations as a regional surveillance unit. It aims to provide early warnings to member nations in case one needs emergency help from the $120 billion fund held at the CMIM currency swap facility.

The three finance ministers noted the challenges from inflation, rising commodity prices and the increasing volatility of capital inflows in the region.

“There are also uncertainties such as the turmoil in the Middle East and North Africa region, and the aftermath of the earthquake in Japan,” the joint statement said.

“We will continue to implement appropriate macroeconomic policies and strengthen policy cooperation to achieve strong, sustainable and balanced economic growth of the three countries.”

The three ministers are scheduled to join their counterparts from ASEAN Plus Three at the ADB conference Thursday.