“Should KEPCO win in the global ‘green race’ with its challenges and aspirations for green growth, it would be able to lead the country’s $30,000-gross domestic product era by 2020,” KEPCO chief executive Kim Ssang-su said.

The firm aims to achieve sales of 14 trillion won, or 17 percent of the total, from eight of these technologies by 2020, 700 times the current figure, it said.

The technologies include the integrated combined cycle, electric vehicle charging infrastructure and nuclear facilities for exports. The firm said it will also work on boosting the use of clean energy such as wind and hydro power.

The firm’s ambitious green initiative comes as countries around the world have been fighting an uphill battle to deal with global climate change, and thus have been posing stronger environmental restrictions on power companies.

Korea, in particular, has been seeking sustainable growth while dealing with climate change issues.

The Lee Myung-bak administration has been pushing green growth as a key policy, with the government having voluntarily pledged to reduce the country’s greenhouse gas emissions by 30 percent by 2020.

While diversifying the source of its revenue from fossil fuel power generation to include nuclear, hydro and renewable energy generation, the firm plans to keep pace with its overseas resources development, officials said. 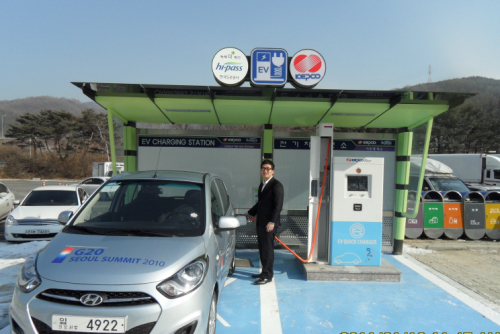 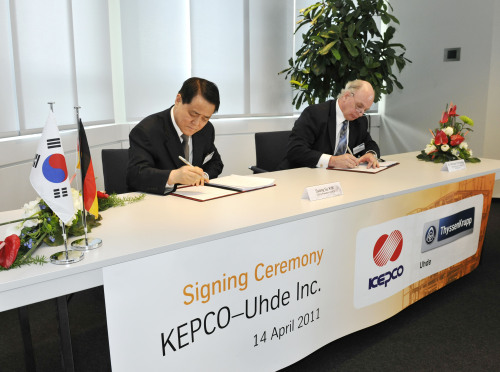 KEPCO CEO Kim Ssang-su (left) and Uhde CEO Michael Thiemann sign a contract in Dortmund, Germany, on April 14.
KEPCO said it aims to raise the self-reliance rate of major minerals such as uranium from 7 percent to 60 percent over the next 20 years.

In addition to green strategies, the firm said it would step up support for its smaller partner firms.

The firm will assist their research and development, boost purchases from them and provide them with financial support, while including them in its overseas projects, officials said.

As part of its green efforts, KEPCO launched a joint venture with Germany-based engineering company Uhde last month. KEPCO is the largest shareholder, holding 66 percent stake for the venture.

The IGCC technology gasifies coal at high temperature and high pressure to create fuel gas comprising mostly carbon monoxide and hydrogen, which is then purified and runs gas and steam turbines.

Conventional power plants are projected to be replaced with IGCC power plants which can notably curb carbon emissions while showing high generation efficiency.

KEPCO-Uhde Inc., which will be established here in July, is hoping to win its first order within the year, it said.

The venture ultimately plans to become a trailblazer in IGCC, SNG, and CCS by building the largest IGCC power plant here which is equipped with leading technology, efficiency and environmental-friendliness, KEPCO officials said.

Another major focus of KEPCO is in smart grids, which allow real-time monitoring of electricity output and demand.

The Korean government plans to inject 27.5 trillion won, jointly provided by the government and private sector, to commercialize it nationwide.

The country expects smart grids to create 50,000 jobs, cut carbon emissions by 230 million tons and save energy imports of 47 trillion won a year by 2030.

Multiple consortiums led by KEPCO, SK Telecom, KT and LG Electronics have been operating their own smart grids system at a test-bed in Jeju Island since December 2009.

KEPCO’s aims to successfully complete its own system there by 2013, develop key technologies for it and eventually start exporting such facilities, officials said.

Regarding clean energy infrastructure, the firm established electric vehicle charging stations on a highway in January, a first for the nation.

The six new charging stations are located at rest areas on Jungbu Expressway near Icheon, Eumseong and Ochang ― both northbound and southbound. Another was launched at KEPCO Research Institute in Daejeon.

“We plan to further seek the most-suitable charging solutions and technology, thus accelerating the commercialization of electric vehicles in the country and lead its green growth drive,” a KEPCO official said.

The firm launched this type of charging station at its headquarters in Samsung-dong, southern Seoul, last October for the G20 Summit.

KEPCO said it has also been dedicated to shared growth with its suppliers and contractors. It was chosen as No. 1 in a mutual growth assessment among 15 public corporations, it said.

The firm will provide 484 billion won in loans to its partner firms. It will also assist their exports and overseas marketing by utilizing its brand value, it said.

KEPCO has also been seeking cooperation with smaller firms in its offshore projects.

The firm has bagged power transmission and distribution projects which include its subcontractors in the Philippines, which was worth $310 million, and in Myanmar.

R&D assistance for smaller firms has been another support mechanism of KEPCO, the firm said.

In 2009 alone, the firm has seen sales growth of 246 billion won after spending 4.1 billion won in research projects with smaller firms, it said.