The company said that the new model will go into production at its plant in Bupyeong, Incheon during the third quarter of the year. 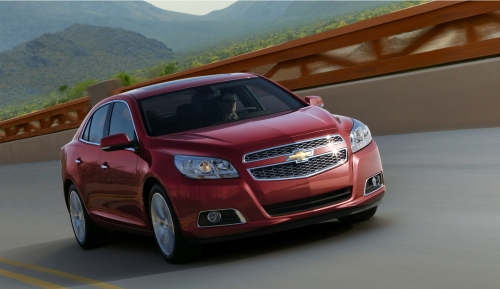 Chevrolet Malibu (GM Korea Co.)
Korea will also be the first among the 100 countries where the vehicle will be marketed to see the Malibu launched, the company said. The Malibu will be released here during the second half of the year, replacing the Tosca.

The vehicle will be produced at the Bupyeong complex’s plant assembling the upper-midsized sedan Alpheon and the Captiva sport utility vehicle. The complex’s other plant produces the Aveo subcompact.

“The Malibu is an important vehicle that will change market trends, and consolidate the Chevrolet brand’s presence in the midsized segment, which is the most fiercely competed segment in Korea,” GM Korea chief executive Mike Arcamone said in an emailed statement.

“The fact that Chevrolet’s first global midsized car is making its debut on the Korean market first reflects GM Korea’s importance as GM’s strategic base.”

According to the company, the Malibu has already raised significant interest from local motorists, with Malibu-related clubs counting more than 30,000 members.

The vehicle will be fitted with the new 4-cylinder Ecotec engine and six-speed automatic transmission.