[ The Korea Herald – Send E-mail ]
Kwon steps up fight against desert expansion in China
By 양승진
Published : May 1, 2011 - 18:57
Updated : May 1, 2011 - 20:21
For Kwon Byong-hyon, former South Korean ambassador to China, almost everything should be considered in terms of the long-term health of the earth.

“What do you think the earth has done for you so far?” Kwon asked in an interview. “And what, if anything, have you done for the earth in return?”

His questions are hard to answer without taking a moment to ponder their implications at a time when the global environment is struggling with an increasing rate of degradation. 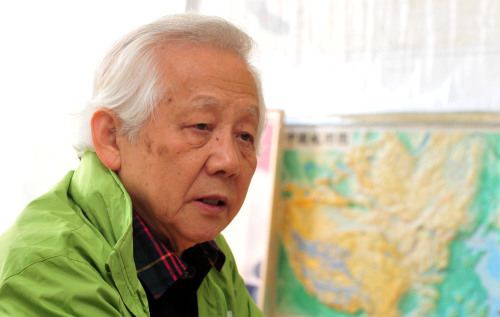 As demonstrated by problems caused by these dust storms, people should pay more attention to the environment, Kwon said. And as far as yellow dust storms from China are concerned, Kwon is internationally recognized for his work in the fight against the desertification that leads to the harmful dust storms in China.

“I believe desertification is more serious than global warming and almost a third of the earth’s surface has already been turned into a desert,” Kwon said. “And the most active desertification is taking place in China,” he said, pointing out the expanding deserts in China on a map on the wall in his office in Seoul.

Desertification, which generates the sand storms known as the “Yellow Dragon,” is not a problem limited to China, Kwon said. It affects the everyday lives of Koreans and other people in Northeast Asia. “Environmental issues are basically borderless,” he said.

Kwon, founder of Future Forest, an anti-desertification group, has been planting trees in China to help prevent the eastward spread of the deserts, the very source of the much-feared yellow dust storms. About 10 years ago when he began his initiative in China, few people believed there was any chance of success.

After all, the spread of deserts is so powerful that even slowing down the process ― much less stopping it ― was unthinkable. Despite lingering skepticism, Kwon pushed ahead with the project with the help of both Korean and Chinese students, planting some 4 million trees in a bid to create what is called the “Great Green Wall” in China’s Kubuqi desert to stop its spread ― and positive results are finally coming out from the region.

Recognizing Kwon’s contribution, the United Nations Convention to Combat Desertification (UNCCD) named Kwon as the first Sustainable Land Management (SLM) Champion in January this year, whose job is to raise awareness on desertification, land degradation and drought among targeted groups.

Kwon, credited with pulling off a significant breakthrough in the fight against the desertification in China, warned that the earth’s land seems to have lost its sustainability, and more efforts should be made to help save it.

Kwon’s latest anti-desertification movement, named “Billion Trees in Desert” (www.btdesert.org) is part of such efforts calling for global participation in planting a billion trees in degraded lands. The campaign, launched jointly by Future Forest and the Communist Youth League of China, is built on the progress in building the Great Green Wall in the eastern frontier of the Kubuqi desert, and UNCCD is also supporting the move.

“When I meet young people, my first sentence is ‘I’m sorry,’ because my generation is partly responsible for destroying the earth that should be kept intact for future generations,” Kwon said.

Kwon said the movement to protect the environment should evolve into a “sustainability revolution” in a way that helps people realize all human beings are in the same boat when it comes to looking after our planet.