[ The Korea Herald – Send E-mail ]
Reese Witherspoon occasionally welcomes disorder in her life
By 주혜미
Published : Apr 29, 2011 - 18:47
Updated : Apr 29, 2011 - 18:47
LOS ANGELES ― As far as tightly wound actresses go, Reese Witherspoon tops the list. She insists upon a strict sense of order in her life. Her production company is called Type A, a moniker her latest costar, Robert Pattinson, says fits her strong sense of self perfectly. And even when she appears to be having a spontaneous moment, lamenting that her well-orchestrated career built around an avoidance of bikinis has been breached by her current role as a leotard-clad circus performer, it turns out the line is a well-rehearsed quip that’s been repeated, practically on a loop, to scores of media outlets.

Which makes it all the more confounding that the 35-year-old actress would subject herself to the unpredictable behaviors of circus animals such as the nearly 9-ton elephant Tai and a slew of trick horses when she shot the adaptation of the Depression-era romance “Water for Elephants.”

“I have anxiety. I get nervous, and I shake,” Witherspoon says. The night before shooting with the elephant, “I didn’t sleep, and I literally shook and shook and shook,” she says, feigning relaxation in a hotel room chair, still perfectly coiffed in a gray dress and 3-inch heels after a long day of enchanting the international press corps. “But the performances with the elephant were really magical for me. Against my better instincts I decided to ride the elephant with no harness, with no safety equipment. It was pretty great.”

Could it be that Witherspoon is finally loosening up? The native Southerner seems to be doing a lot of leaping without a protective net lately. After ending her eight-year marriage to actor Ryan Phillippe in 2007, she recently began a new chapter in her life, tying the knot with Jim Toth, an agent who represents the likes of Robert Downey Jr. and Scarlett Johansson at CAA where Witherspoon is also repped, in a private wedding ceremony just a week before embarking on a publicity tour for “Elephants,” which opens Friday. 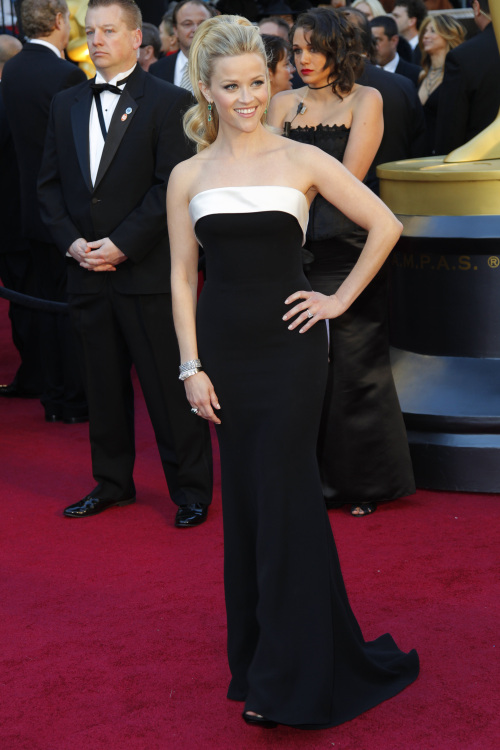 Reese Witherspoon at the 83rd Annual Academy Awards at the Kodak Theater in Los Angeles, California, on Feb. 27. (Los Angeles Times/MCT)
She’s moved easily between big studio projects and smaller films throughout her career, but “Water for Elephants” is something of a hybrid. It’s a roughly $40-million adult drama ― a genre that’s had a hard time making it at the box office in recent years ― but it’s based on a bestselling novel by Sara Gruen and costars one of the hottest properties in town in Pattinson.

Witherspoon, whose successful “Legally Blonde” movies in the early 2000s led to her earning up to $20 million a picture, starred in one of those December releases, the romantic comedy “How Do You Know” from James L. Brooks, a film so eagerly anticipated it made it onto many Oscar watchers’ lists before it had even screened. But it wound up as both a critical and box-office failure.

“It’s a disappointment that audiences didn’t go to the movie and didn’t love it,” the actress said. “It’s such an investment of your time and your energy. You stand by the work and you can’t say you didn’t try. And if Jim Brooks called me up today and said, ‘I want to write a movie for you,’ of course I would do it. You can’t dwell on the disappointments. You have to keep moving and making interesting choices.”

Working with unpredictable animals would certainly seem to qualify. Her commitment to the demands of “Elephants” surprised even her director, Francis Lawrence.

“A lot of people talk about training and practicing and what that really means is not very much. I was impressed by her physicality, training with the animals, getting good and conquering it when it feels scary,” Lawrence says. “She also got really into the body language. Costume designer Jackie West and I gave her a bunch of movies from the ‘30s and she really studied these women and how they moved and spoke and held their bodies. She changed a lot about herself physically for this.”

It was the emotion of the character, though, that Witherspoon connected to when choosing to play Marlena, the luminescent animal rider. Though Witherspoon was not interested in speaking about her recent nuptials, she readily acknowledges that the roles she chooses subconsciously mirror some of her own life experiences. So it’s easy to see the appeal of the “Water for Elephants” story line of finding new love.

In the film, Marlena is trapped in an abusive marriage with the volatile ringmaster August (Christoph Waltz). When she meets the younger, wayward veterinarian Jacob Jankowski (Pattinson), she discovers there’s a lot more living to be done beyond the big top.

“She’s got her life wound so tightly and controlled down to every detail,” Witherspoon says of Marlena, but you get the sense she’s really speaking autobiographically. “You know whenever you feel terribly out of control, you try to control everything and keep it very small. Then in comes this Jacob character: idealistic, young and hopeful. ... For me, this movie is about optimism, that second chances are possible. And to be fearless in your decision-making.”