Voters in by-election constituencies headed to nearby polling stations on Wednesday, pulling the turnout rate up to an unprecedented level and reflecting the public’s keen interest in this year’s political races.

This was much higher than the 23.6 percent or 21.7 percent recorded at the same hour in last year’s two by-elections.

Gangwon Province led the regional figures with 35.9 percent, followed by the Bundang-B constituency in Gyeonggi Province with 33.1 percent.

The figures showed a sharp rise from 6-9 a.m., the morning commuting hours, when a large number of young voters showed up before heading to work. A similar upturn is expected in the evening hours, the NEC said.

The general rate for this year’s by-election is expected to break 40 percent, far above the 32.8 percent average recorded from 2000-2010. 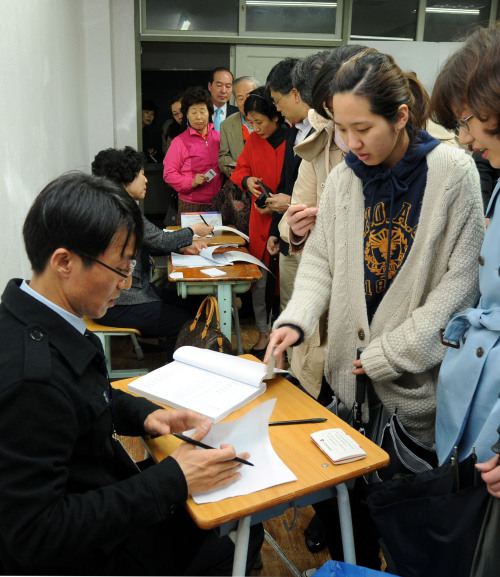 Voters at a polling station in Bundang, one of the 38 by-election constituencies, on Wednesday morning. (Park Hyun-koo/The Korea Herald)
“The rates in the disputed areas, such as Bundang, Gimhae and Gangwon Province, may rise as high as 45 percent,” said a NEC official.

“Gangwon, which has always been active in voting, may even reach 50 percent.”

The parties’ aggressive promotion and the appearance of big names in the races have clearly pulled up the citizens’ participation this year, he explained.

The turnout for the 18th general election, which usually draws keener attention than by-elections, was 45.2 percent, according to the commission.

Parties once again sent out last-minute pleas to the voters to practice their voting rights and participate.

“We ask the people to give us a chance to reform and foster our country,” said Ahn Sang-soo, leader of the ruling Grand National Party on Wednesday morning.

He also condemned the opposition parties for allegedly using the elections as a means to get back at the present administration and neglecting the needs of the people.

The main opposition Democratic Party also invited liberal voters to get out and vote.

“A single vote is worth more than a thousand words of blame,” said a DP spokesperson.

“The voters of this country are the only ones who may straighten out the inequitable reality.”

Though the official campaign period ended at midnight Tuesday, parties are still allowed to send out mobile text or Twitter messages to encourage citizens to vote, as long as they do not state the party or candidate names, according to the NEC.

“I have done my very best over the past four months, since I registered myself as a backup candidate, and now am ready to accept the people’s choice,” said Kang Jae-sup, the GNP candidate for the legislative seat in the Bundang-B constituency.

His rival, Sohn Hak-kyu of the DP, also placed his vote before leaving for his camp’s office.

“I have seen hope and aspirations for changes here and shall now wait for the results with a humble heart,” the DP leader said.

The voting hours are to end at 8 p.m. and the final results are expected around midnight.