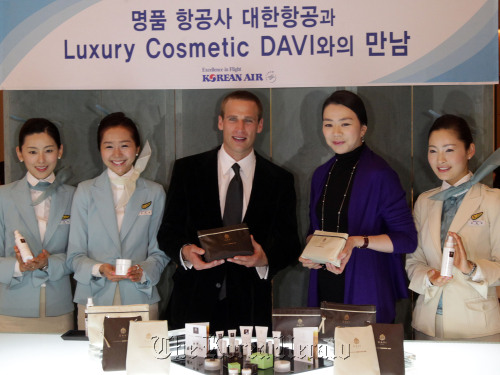 Heather Cho (fourth from left), senior vice president at Korean Air and DAVI’s chairman Carlo Mondavi (third from left) after featuring a new amenity cosmetic skin care set for business and first class passengers in Incheon on Wednesday. (Korean Air)
At a press event in Incheon, the company said it will upgrade the in-flight menu for economy seat passengers beginning in June, serving healthier meal options ― salmon salad and noodles ― for those flying to the Americas and Europe.

It will also hand out a new amenity kit, which features DAVI’s skin care products that are made of natural ingredients such as grape seeds and fermented grape extracts, starting in May in some routes, including Los Angeles, New York and Paris.

It will expand the service to its routes to the America in July and in its flights to the Oceania destinations in September.

“We expect that Korean Air and DAVI will achieve joint growth through this opportunity and that this service will play a big role in the success of our airline as we plan to soon showcase the new A380,” said Heather Cho, senior vice president at Korean Air.