Parties and candidates were in last-minute campaign mode Tuesday, the day before the by-elections that may set the course for next year’s general and presidential elections.

A major matter of interest for all is voter turnout.

In the past, the higher the turnout, the better the chances for the opposition party.

In a survey on residents of by-election constituencies, 64.1 percent of respondents said they would vote, the National Election Commission said on Monday. 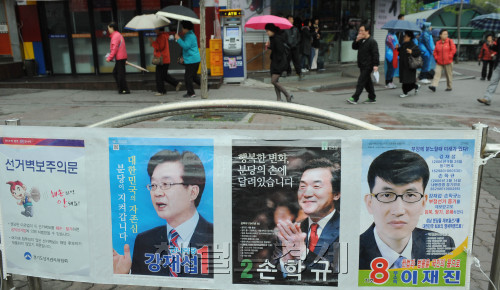 People in the Bundang-B constituency walk past the by-election posters Tuesday, the last day of the electoral campaigns. (Park Hyun-koo/The Korea Herald)
This compares to the 51.9 percent average rate in 2008-2010, reflecting the public’s keen interest in this year’s race.

In the Bundang-B constituency, where the most intense contest is expected, the percentage intending to vote was 68.1 percent, one of the highest ever figures, officials said.

The figure, however, does not mean an easy race for the main opposition Democratic Party, as the survey also showed a higher level of enthusiasm among citizens aged over 50, who mostly support the ruling Grand National Party.

Some also raised concerns about the weather, as rainfall is expected in most parts of the country Wednesday.

Bad weather conditions have had negative effects on voter turnout in the past, but it is uncertain which age group is more likely to shun the polls ― the generally more liberal young voters or older conservative ones.

As many Bundang and Gimhae residents commute to Seoul or Changweon, rain or heavy traffic could discourage voting, according to the Korea Society Opinion Institute.

Amid the numerous variables, parties remained tense about the Bundang-B constituency.

“Though the results of this tight race are not yet predictable, we have a considerable chance,” said the GNP spokesperson for Kang Jae-sup, the GNP candidate in the constituency.

The DP camp and its candidate Sohn Hak-kyu stepped up campaigning to increase the participation rate, targeting voters in their 20s and 30s.

“The support rate for Kim is rising to the last minute, whereas that for Lee has taken a downturn,” said a representative from Kim’s camp.

The race in Gangwon Province has taken a controversial turn due to legal disputes between the candidates over allegation of illicit campaigning.

Local police raided an unregistered call center and arrested some staff of GNP candidate Ohm Ki-young’s camp on allegations of making secret calls to urge voters to cast their ballots for Ohm.

The DP reported Ohm to the Chuncheon District Prosecutor’s Office on Monday, accusing him of breaches of election law.

“Public sentiment is shifting upon the detection of the GNP’s illegal campaign attempts,” said the spokesperson for Choi Moon-soon, the DP candidate.

The ruling party, however, shrugged off the DP’s claims.

“Ohm is still taking a considerable lead over Choi,” said a GNP spokesperson.

“Also, the DP is not free from illicit campaign charges either.”

By this, the ruling party referred to SMS messages which the DP sent out earlier to a random pool of 220,000 voters, falsely claiming that Choi was catching up with Ohm with a 1 percent gap.