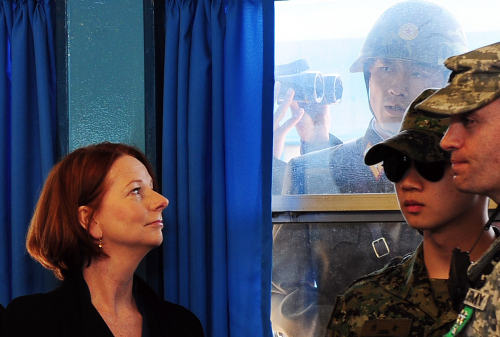 (Australian Prime Minister Julia Gillard (left) watches a North Korean soldier looking through the window as she pays a visit to the conference room of the United Nations Command Military Armistice Commission at Panmunjeom Sunday. Yonhap News)
Australian Prime Minister Julia Gillard on Sunday mourned hundreds of her country’s soldiers who fell during the 1950-1953 Korean War and visited the truce village of Panmunjeom during her visit to South Korea.

“Our commitment to Korea was a sign of the future of Australia’s security in the new post-war world,” Gillard said in a ceremony commemorating the 60th anniversary of a fierce battle at Gapyeong in Gyeonggi Province, where a small force of Australia and other allies defeated an attack by a Chinese division.

The battle, Australia’s largest military action during the war, helped stop the Chinese “spring offensive” and proved crucial in preventing a Chinese breakthrough towards Seoul, Gillard said during the ceremony attended by dozens of Australian veterans of the war.

“That night the defining fight for the Australians in the Korean War began ... this battle that stopped a breakthrough,” she said, stressing Australia proved itself as “a reliable and courageous ally.”

More than 17,000 Australian troops served during the Korean War, with 340 Australians sacrificing their lives.

Of those, 281 remain buried at the U.N. Memorial Cemetery in the southern port of Busan.

Gillard later on Sunday visited Panmunjeom straddling the tense border between the two Koreas, which have technically remained at war since the conflict ended with a ceasefire in 1953.

On Monday, Gillard will attend the ANZAC Day Dawn Service ― Australia’s memorial day ― at the National War Memorial in Seoul and hold a summit with President Lee Myung-bak.

Gillard, who arrived in Seoul on Saturday, will leave for China on Monday, the last leg of her Asian trip, which began in Japan.

On Saturday, the Australian leader stressed the need to seal a free trade agreement between South Korea and her country at an early date, the Korea International Trade Association said.

Gillard told Korean business leaders that a quick conclusion of a bilateral FTA is required to strengthen economic cooperation, according to the KITA.

The two countries launched negotiations on a bilateral trade deal in March 2009 and have since held five rounds of talks, focusing on agriculture, services and autos, among other sectors.

Korea’s Deputy Trade Minister Lee Si-hyung said last week that Seoul hopes a free trade deal with Australia will be concluded within this year, noting substantial progress has been made.

Bilateral trade volume between the two countries amounted to $27 billion last year. South Korea, which imports a third of its total mineral resources from Australia, is the third-largest export market for the country.

By Kim So-hyun and news reports