The reality that one of the diplomatic community’s most respected ambassadorial couples is leaving only rang true after they looked back on their residence to see a once colorful home laid bare.

Paintings, artifacts and everything that makes a home personal and representative of a family have been packed up and sent on their way to the Al-Ma’ainahs’ next posting in Santiago, Chile.

Seoul was more than just another posting for Ambassador Abdulla Al-Ma’ainah and his wife Aida; it was one that opened their eyes to a future both for United Arab Emirates-Korea ties and their personal future after they retire from the hectic world of diplomacy.

“We have already planned for the future and Korea plays a huge role,” Al-Ma’ainah said, a sentiment echoed by his wife who looks toward the future as an opportunity to combine business with charity.

During their five and a half years in Korea, the duo opened their hearts and offered their time to every goodwill organization asking for their help to raise money.

“I will miss all that work, the MOFAT, the Red Cross, the SIWA Diplomatic Bazaars, the Hi Seoul Festival where we sold our foods and products while talking with people. You have to take part in all these charitable events to increase exposure,” she said. 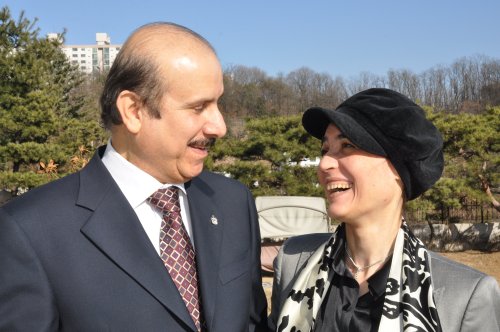 United Arab Emirates Ambassador Abdulla Al-Ma’ainah and his wife Aida (Yoav Cerralbo/The Korea Herald)
Aida explained that she would like to build on the alliance between the Red Cross and Red Crescent. She is also in talks with Doctors Without Borders to assist immigrants arriving in Korea.

“Many embassies don’t take care of them so I want to help. We did a lot of fundraising to help them but they need a big project. They can’t wait for bazaars and the numbers are increasing,” she said.

This is not an ordinary couple. They went beyond the limits of duty for love and country. While the ambassador worked to upgrade diplomatic, political and economic ties, Aida could be described as the heart of the couple, emphasizing the UAE’s warmth at all charity, social and diplomatic events.

“There are no lines between work-related and non work-related in the lives of diplomats,” he said. “We work day and night even during our vacations and public holidays.”

Of all the initiatives that were accomplished during his tenure, and there are many, Al-Ma’ainah is most proud that the relationship between both countries was elevated to a strategic partnership.

“I’m also proud of the rapprochement and communication made between the two countries at the leadership and business levels as well as at the people-to-people and cultural levels,” he said.

Another proud moment came when the leaders of both countries signed and initiated the now famous UAE nuclear deal.

The $40 billion deal to build and operate four nuclear power plants in the UAE surprised many, including France’s Areva-led group, which was also engaged with the UAE on the nuclear deal and the U.S.-Japanese reactor supplier GE-Hitachi.

Al-Ma’ainah’s secret was his hard work and dedication in promoting Korea in the UAE and the UAE in Korea.

“The nuclear project is one of our most important projects between our two countries, including the Arab League,” he noted.

“I worked both ways to get that deal. There were many offers from many countries but we built the trust between our two governments to get that deal,” he said. “We also put Korea in the spotlight so that our government could see what Korea has to offer. We spoke, explained and put a lot of effort behind the deal, a lot of legwork too.”

Construction of the first nuclear plant is expected to start next year with all four commissioned between 2017 and 2020.

An amusing story happened when the Al Ma’ainahs were both asked to don hanboks for an interview with a local magazine that would be distributed in Korea and (unknown to them at the time) New York’s Korean Embroidery Museum.

“People would be confused,” quickly responded the ambassador with a laugh.

As a parent, Aida was very interested in learning about the mother’s role in today’s Korean society.

She found that mothers from the Arab world and Korea are similar when it comes to their children’s education and health.

“I enjoyed exchanging and finding similarities between the two countries,” she said. “If one of my children doesn’t do their homework, or I get a complaint from their school, then I get crazy like a Korean mother.”

When asked what they would miss, both agreed they would miss the qualities that characterize the Korean people, such as generosity and respect for guests ― both qualities heavily adhered to in the Middle East.