To showcase the beauty and global mark of both dresses, the Vietnamese Embassy set up a cultural exchange day that celebrates the new designs changing the face of these classical icons. 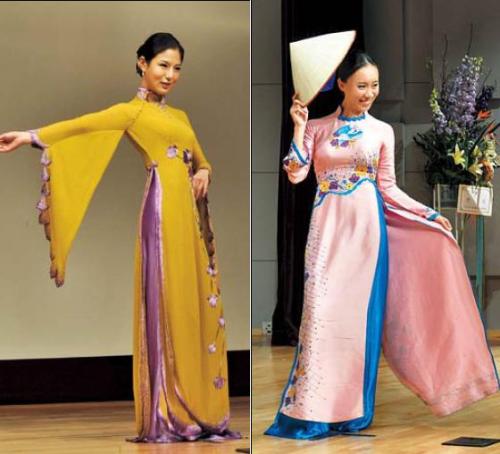 New styles of the traditional Vietnamese dress showcased at Vietnam-Korea Day. (Yoav Cerralbo/The Korea Herald)
“In the context of strong bilateral relations, it is necessary to diversify cultural exchanges between the two countries,” said Vietnam Ambassador Tran Trong Toan to The Korea Herald.

Like the phoenix, both Asian countries were reborn out of the ashes of wars, building economies that are either leading the world in many sectors, as in the case of Korea, or emerging to become powerful players.

“We share a lot of common qualities such as history, culture and traditions so we would like to make the people feel closer to each other and understand each other,” said Tran.

On the business and bilateral front, relations are fantastic.

Korea is now one of Vietnam’s six strategic cooperation partners ranking first in terms of investments with more than 2,600 projects totaling over $25 billion.

With all these healthy figures, one area that needs to be improved is regular people-to-people relationships, which adds fuel to the economic fire.

Last week’s cultural exchange day featured a fashion show that flaunted the newer designs of the tight-fitting silk tunic ao dai and the vibrant colors and simple lines of the hanbok.

“The idea of the show is to introduce the beauty of the traditional dresses of our two countries,” he said. “Each nation has its own culture which enhances its national identity in the world community.”

Tran explained that many Vietnamese ministries request that their employees wear ao dai’s to work.

Like Korea, Vietnam’s traditional dress is worn at weddings and other formal occasions, and is also common as a high school uniform.

Furthermore, companies often require their female staff to wear uniforms that include the ao dai, so flight attendants, receptionists, restaurant staff, and hotel workers in Vietnam may be seen wearing it.

The two countries will celebrate two decades of diplomatic relations next year and Tran promises a year filled with events that will bring people on both sides closer.