KORAIL’s union has slammed staff cuts, blaming them for Saturday’s derailment of a metro train.

While the operator discribes the accident as a minor error, its union attributes it to KORAIL’s downsizing of maintenance employees. Unionists said that the accident could have caused serious injuries, as well as damage.

According to KORAIL, the K-6118 train with six carriages traveling from Bojeong to Seolleung on the Bundang Line went off track as it approached Jukjeon Station around 12:40 p.m. 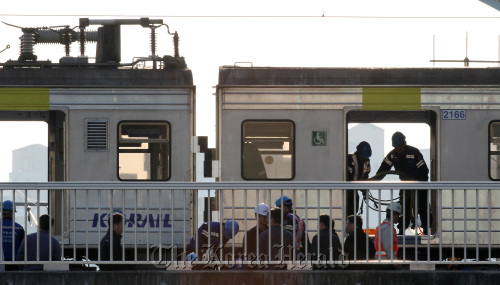 KORAIL maintenance engineers work on metro train K-6118, which derailed near Jukjeon Station on Saturday afternoon. (Yonhap News)
No damage or injuries were reported as the train was running slowly and passengers managed to escape by opening the automatic doors manually. But it took more than six hours for KORAIL management to resume operation.

The accident came 13 days after the government and KORAIL, which operates services on mainline railways and several subway lines, had announced a set of guidelines to strengthen safety management, including replacement and closer monitoring of parts as well as safety training for all staff.

The guidelines were drawn up after the derailment of a KTX train near Gwangmyeong Station in Gyeonggi Province on Feb. 11. The accident brought nearby railway traffic to a halt for more than 30 hours.

KORAIL President Huh Joon-young, who took office in 2009, laid off 5,100 of 15,000 workers, most of whom were in charge of repairing and examining safety on tracks, electricity cables, signal equipments and train cars.

“It is organizational downsizing which neglects passenger safety,” Korean Railway Workers’ Union said in a press release. The union said it has raised safety issues to management, citing 10 derailments since 2008, but that management has ignored its concerns.

“At this point, there isn’t much we can say about the accident. We will study the case,” a KORAIL spokesman told a local media outlet. “One of the reasons why it took a long time to inspect the derailed carriage is that the new components were made using advanced technologies. The new parts do not necessarily require tight safety management.”