Since 2006, the university in the western port city has run the Head Start Program for U.S. troops stationed at nearby Camp Humphreys, the 7th Air Force in Osan and other installations. Under the program, they learn about the Korean language, history, politics, culture and society in general. 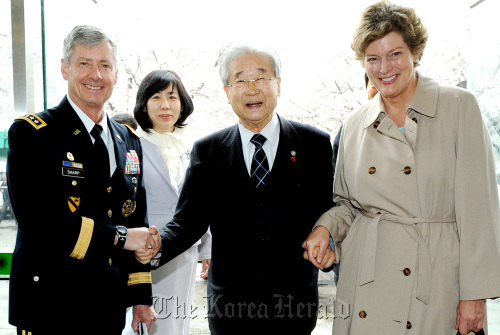 Last year alone, 1,499 U.S. troops attended the three-day program. More U.S. soldiers are expected to join the program as Pyeongtaek will become the main hub of the U.S. military with its relocation project under way.

As part of a global U.S. troop realignment for strategic flexibility, the U.S. military has been working to relocate the U.S. military headquarters in central Seoul and other camps north of Seoul to Pyeongtaek. The relocation is scheduled to be complete by 2016.

On Friday, U.S. Ambassador to Seoul Kathleen Stephens and Gen. Walter Sharp, commander of the 28,500-strong U.S. Forces Korea, paid a rare visit to the school to discuss ways to bolster academic exchanges and better cooperate in educating U.S. troops.

“The American military stationed in Korea has made a profound contribution to the security and economic development of South Korea and I am grateful for its presence,” school president Cho Ki-hung said during his address at a luncheon with some 200 people including the ambassador, commander and U.S. troops.

“I hope that our strong relationship based on the alliance and friendship of our two countries will continue to grow in the future.”

During her address, Stephens said that a series of programs carried out at the university have set a good example of cooperation that will help further cement the 60-year-old alliance forged in blood during the 1950-53 Korean War.

“The kind of a model of cooperation that is now being built here is going to be a model of the kind of the relationship that stands for the 21st century alliance relationships, a model not only for other parts of Korea, but for the world,” she said.

Sharp expressed his gratitude to the university for its efforts to help incoming U.S. military personnel mingle with local residents.

“This great program directly supports my top priority, which is to strengthen the Republic of Korea-U.S. alliance. It will help further the university’s worthy goal of increasing understanding between our nations,” he said.

Since last year, the school has run a program under which its students work at Camp Humphreys as interns.