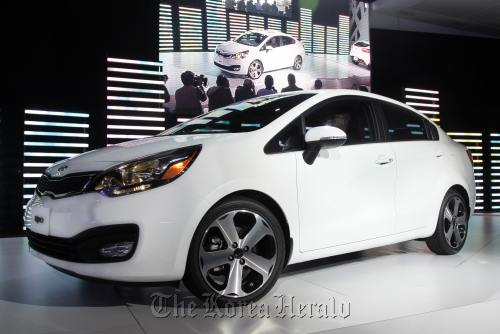 The New York show runs until May 1, while the Shanghai event, which has become one of the world’s largest auto industry events, ends Thursday.

At the New York show, Hyundai unveiled the new Accent subcompact in the United States for the first time.

With the U.S. market, which has traditionally favored larger and more powerful vehicles, shifting toward economic cars, Hyundai is hoping to continue pushing the recent sales rise it has seen in that market with the new subcompact.

The new Accent will be launched on the U.S. market in the coming summer, the company said. The vehicle’s annual sales target for next year is set at 60,000 units.

Launched on the Korean market in November 2010, Hyundai also introduced the vehicle with country-specific modifications to Russia.

The Accent displayed at the show is fitted with a 1.6-liter gasoline direct injection engine that puts out 138 brake horsepower, and manages 17 kilometers per liter or 40 miles per galloon under highway conditions. According to the company, the new Accent is its fourth model to manage 40 miles or more per gallon of fuel. The vehicle manages 12.8 kilometers per liter in urban driving conditions.

In addition to fuel economy, the company has given the Accent a range of safety and convenience features including six airbags, active headrest, iPod connection and Blue Tooth features.

The company said that it hopes to sell more than 200,000 units of models with 40 miles per gallon or higher highway fuel consumption this year, which will be equivalent to about 30 percent of Hyundai’s projected U.S. sales this year.

At the show, the company unveiled the new Rio, which is known as the Pride in Korea. The new subcompact is fitted with a 1.6-liter gasoline direct injection engine that puts out 138-brake horsepower, and six-speed automatic transmission.

With prices starting at about $13,000, the company is reported to have set the vehicle’s U.S. sales target at a figure higher than that recorded by the previous version.

During the first quarter of the year, Rio sales declined 26 percent compared to the same period last year to come in at 4,885 units.

The new Rio will replace the current Kia Pride in Korea later in the year.

Along with the new subcompact, Kia is showcasing the 2012 Soul compact crossover utility vehicle at the New York event.

Features new to the updated Soul include the UVO voice-operated infotainment system developed in collaboration with Microsoft Corp., and upgraded engines.

The 2012 Soul is available with a 1.6-liter gasoline direct injection engine that puts out 135 brake horsepower, and a 2-liter engine with a power output of 160 brake horsepower.

Kia’s U.S. operations also revealed that the K5 midsized sedan, known as the Optima outside of Korea, will go into production at the company’s plant in West Point, Georgia at the end of the year.

The company is said to have begun making preparations to add the K5 to the plant’s assembly line, and aims to roll out 150,000 units of the model on an annual basis.

According to reports, the company ultimately plans to produce all K5 vehicles sold in the U.S. at the Georgia plant.