During a press rehearsal Tuesday prior to April 21-24, soprano Kim Eun-joo in the role of Tosca showed how a woman’s hysterical jealousy yet passionate love could lead to torture, murder and finally, suicide.

The story unfolds as escaped political prisoner Angelotti (bass Kim Min-seok) hides in a church, runs into painter Cavaradossi (tenor Park Ki-cheon) and gets his help.

The evil Scarpia (baritone Ko Sung-hyun), takes advantage of the jealousy of Tosca, lover of Cavaradossi, to catch the prisoner.

In the second act, Tosca’s famous aria “Vissi d’Arte, Vissi d’Amore,” (I lived for art, I lived for love) performed as she was agonizes over the evil Scarpia’s threat to desert her beloved Cavaradossi and become Scarpia’s lover, was powerful and sorrowful enough to overwhelm the audience.

However, during a duet of Tosca and Cavaradossi, tenor Park’s voice was somewhat dwarfed by soprano Kim. 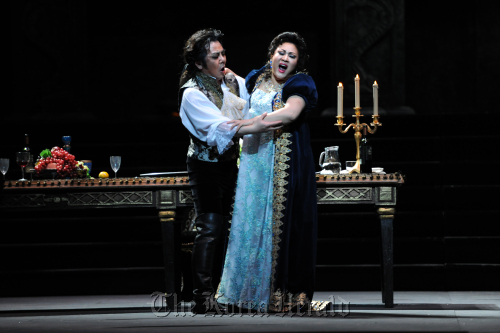 Soprano Kim Eun-joo (right) in the role of Tosca and baritone Ko Sung-hyun as Scarpia in Puccini opera “Tosca” (Sejong Center for the Performing Arts)
Baritone Ko Sung-hyun’s Scarpia acting and singing was spectacular in delivering the message that humans are weak and tempted by their own suspicions.

“Tosca” is part of the opera company’s plan to stage Puccini’s two operas this year. The other is comic opera “Gianni Schicci” in July.

Puccini’s music, performed by the Gyeonggi Philharmonic Orchestra, went smoothly along with the acting, although conductor Gibson’s demands were quite strong.