“I don’t believe our goal to achieve as much as 70 percent market share in the global 3-D TV market toward the end of this year to be too ambitious,” Kwon told reporters. 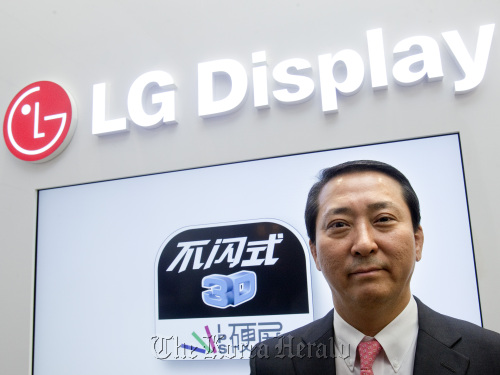 He said the second quarter, therefore, would yield significant profit for the company as supply starts to better meet demand, while sales of monitors using FRP also would pick up.

The third quarter will be even better, Kwon indicated, as that’s when LG Display will start pitching FPR globally, including in the U.S.

Samsung Electronics has been visibly nervous over LG’s recent growth in the 3-D industry; the two earlier this year engaged in a very public verbal brawl when Samsung attacked LG’s new technology after LG showed huge confidence in its dominance in coming years for 3-D TVs.

Samsung continues to claim that its technology ― called shutter glass ― is dominant and more competitive than FPR.

Random surveys, however, show that both experts and consumers appeared to favor FPR, which LG says has eliminated many of the side-effects of 3-D vision.

FPR also uses glasses that do not require batteries and are much cheaper than glasses for shutter glass.

Kwon was therefore upbeat about a turnaround in the coming quarter, saying that the second quarter would yield significant operating profit in comparison to the deficits incurred in the first quarter.

He saw the Chinese market, in particular, having a significant increase in 3-D TVs.