SK Energy, the refining unit under the nation’s largest oil refiner SK Innovation, said Monday that it helped its subcontractors launch an overseas project in Vietnam as part of its efforts for promoting “shared growth.”

The project marks the first time for a mid-sized Korean firm to carry out a large-scale maintenance project outside the country, the refiner said.

It is expected create technology exports of $150 million and boost the involved firms’ global competitiveness, the firm said.

“The project is meaningful in that the combination of SK Energy’s leading operation and management technologies and its partner firms’ capability has created a new value of shared growth,” Sung Hak-yong, director of plant operation of Binh Son Refining & Petrochemical Co. said.

“I think this would be a good opportunity for us and our partners to boost global competitiveness.”

BSR is said to have selected the three Korean firms, instead of local and foreign competitors, due to their expertise in carrying out such projects with SK Energy.

The firms which specialize in petrochemical facilities construction, repairing and maintenance have been working with SK Energy at its Ulsan production complex.

SK Energy said it has played a crucial role in accomplishing the contract, promoting a new way of achieving shared growth between the firm and its partners. 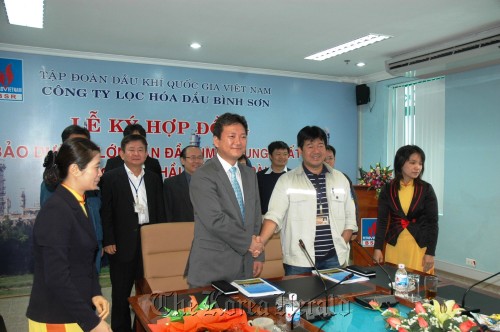 BSR CEO Nguyen Hoi Jiang (right) and Daechang Corp. vice president Son Mu-hyeong after signing a contract in Vietnam, Monday. (SK Energy)
The refiner said it has requested permission for the three firms to participate in the international bid to BSR prior to the event.

Local conglomerates have been boosting their efforts to support subcontractors in line with the government-led “mutual growth” drive.

The Lee Myung-bak administration has been a keen advocate of sharing prosperity between conglomerates and their smaller partners, urging the bigger firms to take the lead to help create a level playing field.

SK Energy has been providing its operational know-how after signing an operation & management contract with the firm in September 2009.

SK Energy and its subcontractors met with BSR on Monday and began preparation for the maintenance works slated for July-September.

The refiner said it plans to dispatch more experts to the Vietnamese refinery. It already has 70 technicians there.

Meanwhile, SK energy has been seeking to expand its global operation based on its 47 years experience of operating refineries and petrochemical plants.

The firm has signed contracts to share its leading technologies with JAC Singapore in 2007, Pertamina Indonesia in 2008, and BSR Vietnam in 2009.