Singer Yoo Yeol did not really know that he would become a CEO of a musical company devoted to children until several years ago.

However, since he established Yoo Yeol Company in 2006 to produce the children’s musical “The Bremen’s band,” the 50-year-old has drawn nearer and nearer to the thought that he could devote his whole life to making good musicals for children.

“It just happened naturally. The more I worked for it, the more I felt right. Singing and making musicals for family and children are the two things I could do with passion until the end of my life,” Yoo said in an interview with The Korea Herald in Seoul.

“Children’s musicals are not profitable at all, but uncultured kids become uncultured grown-ups. Local governments and companies should support children’s culture first, before they consider investing in adult culture such as building a big theater.”

Yoo went on to say that it was not really fair for theaters to charge the same venue rental fees to performances for adults and those for children, as ticket prices for children are cheaper.

Despite such financial difficulties, Yoo kept staging the musical “The Bremen’s Band.”

Adapted from the fairytale “The Town Musicians of Bremen” by the Brothers Grimm, the musical has been continually staged for the past five years across the nation, since its premier at the Chongdong Theater in April 2006. More than 350,000 people have seen the musical.

The story is about a dog, a donkey, a cat and a cockerel forming a band and pursuing their dreams through an adventure.

In 2009, the musical was invited by Bremen and Offenbach cities in Germany and Offenbach Mayor Horst Schneider said “it was a good opportunity to see ‘The Bremen’s band’ recreated for the Korean version,” Yoo said. 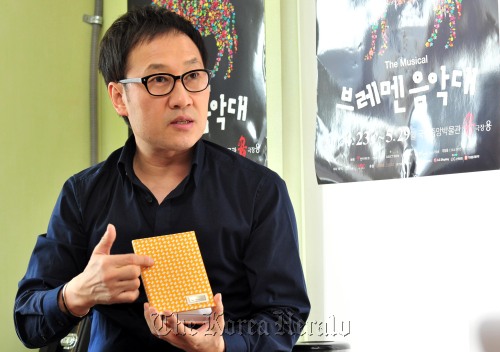 “It is very meaningful that our work is opening the festival, which runs for 20 days. Depending on the audience response, we will draw up a China tour plan,” Yoo said.

In Korea this year, the musical will be staged at the Theater Yong at the National Museum of Korea from April 23 to May 29.

Although the title is the same, Yoo’s company has been fine-tuning the piece every year.

This year, there will be no more a story teller on stage and more focus on the message that teamwork and courage are important in realizing a dream, Yoo said.

“Every year, we’re trying to change ourselves to present it better. I always tell my employees to enjoy the work and make every one involved happy,” he said.

While Yoo Yeol Company’s first musical hit is an adaptation of a globally well-known German content, the second one will feature a traditional Korean story in a global format.

For the past year and a half, the company has been preparing to present “Sugung Fantasy,” an adaptation from a famous Korean pansori “Sugungga,” at the upcoming Daegu Musical Festival in July. “Sugungga” is a story of a rabbit who lies to a terrapin and his ill King, living under the sea, that he has left his liver in the forest, to run away from the King’s plan to cure his disease by eating the rabbit’s liver.

A Korean writer who studied in New York rewrote the scenario and an American composer created music for the musical.

“I thought it was important to work with non-Korean people to make Korean culture appeal to the global audience. After the Daegu premier, my goal is to enter New York’s theater scene three years later,” Yoo said.

The singer, who swept the K-pop ballad scene in the 1980s and 1990s after winning a national college singing competition in 1986, said he also plans to release an album in the second half of the year.

His latest remake album was out in 2005.

“With a brass big band, I plan to record some new songs and my favorite old songs,” the bachelor said, adding that he hopes to get married within the year.