Korea’s stem cell research is slowly showing signs of a renaissance as many scientists strive to mend its reputation, marred by a case of scientific fraud six years ago.

Although the 2005 incident involving Prof. Hwang Woo-suk, once hailed as a global cloning pioneer, led to a slump in human embryonic stem cell study here, other branches of the field that use adult stem cells and reprogrammed stem cells have thrived.

In the vanguard of the biotechnology drift may be Medipost, a leading local startup, which runs a cord blood bank and develops cord blood-derived drugs.

Founder Yang Yoon-sun and her team are gearing up to launch the world’s first stem cell remedy for arthritis, called Cartistem, here in the second half of the year.

“Stem cell treatments are the third-generation bio medicines,” Yang told The Korea Herald in a recent interview. “Unlike the existing market for chemical products dominated by U.S. and European giants, Korea is competing with them in a nip-and-tuck race for stem cell therapies.”

The 47-year-old Yang was one of a number of high-flying doctors who jumped into the biotech business boom by setting up a stem cell-based venture about a decade ago.

Cord blood is blood that remains in the placenta and in the attached umbilical cord after childbirth. It contains stem cells, thus can be used to make medicine for incurable illnesses without political and religious opposition to human cloning.

“Korea was a barren soil for cord blood study when we started in 2001,” Yang said. “No one really thought of developing cord blood into drug materials.” 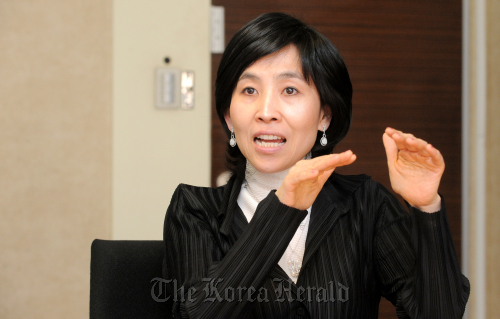 In February, it became the first foreign company to be allowed to conduct first- and second-phase trials for stem cell medication by the U.S. Food and Drug Administration.

“There are so many arthritis patients around the world, and there will be even more as the aging process accelerates,” Yang said.

“Current remedies like cell therapy and joint replacement surgery have limitations on the size of lesions or the type of joint and don’t work with degenerative diseases. But Cartistem has no concern with any of those issues.”

Yang values the market potential for Cartistem here at up to 250 billion won ($229.4 million). The scale grows exponentially if it goes global.

According to the medical industry, 5 million to 7.5 million Koreans are suffering from degenerative arthritis, which accounts for 10 percent to 15 percent of the population.

Through a partnership with Dong-A Pharmaceutical, Korea’s largest company in the industry, Medipost hopes to maximize sales and marketing effects.

It is also negotiating with a few multinational pharmaceutical companies for future projects, Yang indicated.

“If you look at the latest trend, the global firms tend to form a partnership with biotech ventures for technological alliance or joint product development,” she said.

“Stem cells are where Korea can make a leap in the pharmaceutical industry, but we have a long way to go.”

Yang said her venture could survive a “stem cell crisis” after Hwang’s case thanks to success in its cord blood bank business, which generates 80 percent of sales.

Its services include storing frozen cord blood after a child is born for future uses such as diseases including leukemia, infant cancer, diabetes and spastic paralysis.

According to the Ministry of Health and Welfare, there are 19 organizations operating a cord blood bank in Korea, 14 of which are commercial.

Medipost seizes a 41-percent stake in the market, the ministry reported. About 35,000 new families signed up for the storage service last year.

“I think more and more people have recognized its use and advantages over the past couple years,” Yang said.

“It shows that the purpose of the storage expands as the life science and engineering technology develops. We expect better results this year.”

“The cosmetics industry has a big potential as it deals with things like women, beauty and aging,” she said. “It’s an interesting field but sensitive to trends. You have to have capabilities in many different fields.”