Jens Heithecker, IFA executive director at Messe Berlin, said the exhibition space ― 5,000 to 10,000 square meters more than last year’s 134,000 square meters ― has already been completely booked out during an interview with the Korean press at the global press conference held April 14-17 in Alicante, Spain. 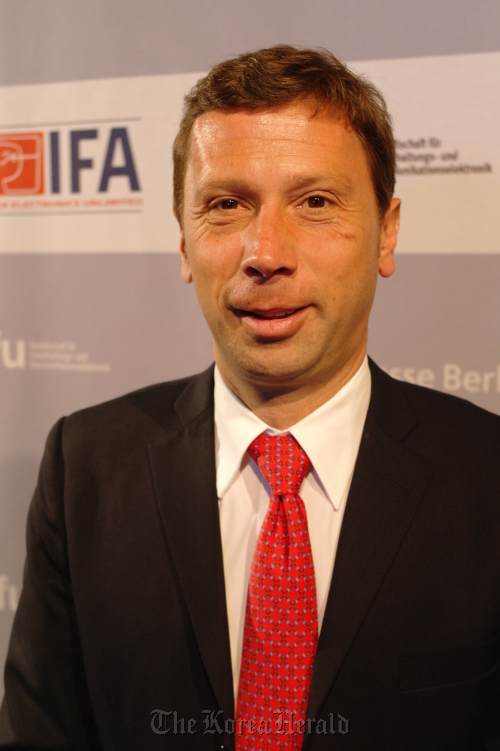 Jens Heithecker, IFA executive director at Messe Berlin.
“The number of exhibitors depends on the group of small exhibitors (which took up 8 percent of the area in 2010),” he said. “Last year, we had 22 percent more exhibitors and this year, we expect a 5-10 percent increase.”

Emphasizing that IFA ― a trade show of consumer electronics and home appliances which is taking place for the 51st time this year ― is not an information and technology show but one that integrates IT, increased communication with participants from 47 countries has built its global impact, according to Heithecker.

With 50 percent of the show dedicated to retail, the number of orders made during the trade show has jumped last year, with the amount adding up to 3.5 billion euros in just 6 days, he said.

“It depends on what’s happening in the market, but usually every exhibitor sets up orders at IFA,” said Heithecker.

About two local electronics makers Samsung Electronics and LG Electronics, both participants of the event in 2010, he said Samsung is one of the lighthouses for even other bigger names, whereas Europe is still a challenge for LG.

“For the TV division, Samsung is a small step away, but there’s more room for development for LG. LG wouldn’t be a lighthouse,” he said.

Heithecker further elaborated that communication and management in Western markets were the two biggest challenges for LG.

When asked about how he sees the two different types of 3-D offered by the Korean firms, Heithecker said the main issue is not with the glasses but to explain why every TV has to have 3-D.

“We have to see what the next step is and (we have) to explain why to choose 3-D if you buy a TV,” he said.