“If an orchestra wants to do better, it needs three things; the expertise of orchestra members, the expertise of the conductor and continuous support. In the history of Korean orchestras, none of them have really existed but the first two have improved in recent years,” Chung said in an interview at the SPO’s office in Seoul on Friday.

The SPO recently signed a long-term license agreement with prestigious record label Deutche Grammophon and created a “Mahler fever” among Seoulites who scrambled to get a ticket to the orchestra’s two-year concert series covering all of Mahler’s symphonies in 2010-2011. 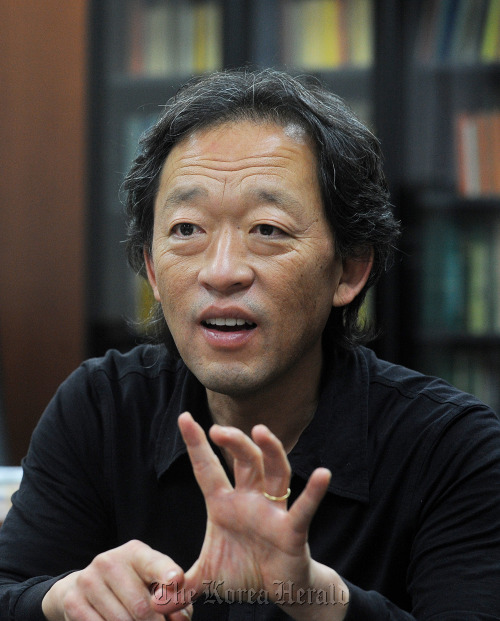 Maestro Chung Myung-whun, music director of the Seoul Philharmonic Orchestra (Lee Sang-sub/The Korea Herald)
Chung took the helm of the orchestra in 2005 when President Lee Myung-bak was Seoul Mayor. In six years, the international reputation of the SPO surged. The orchestra has been invited to the Edinburgh International Festival 2011, scheduled to be held in August and September.

“When President Lee Myung-bak was Seoul Mayor, he promised me that the SPO would have its own concert hall by 2008. But it was a promise he couldn’t keep. I have urged the Culture Ministry for support as well but it seemed that it wasn’t easy (to persuade Seoul council members),” he said.

Chung added that the SPO should be regarded as “the national orchestra.”

“Officially, this must be the national orchestra, although its name comes from Seoul,” he said, adding that he will keep working for the SPO even after he retires from other posts in overseas orchestras.

Chung is known to be extremely media-shy but for the first time, he contacted reporters for an interview.

When Chung was working as music director for the Opera de Paris-Bastille from 1989 to 1994, Lang persuaded then French President Francois Mitterrand for the loan of the books, Chung said.

“Lang also helped me write a letter to President Sarkozy to explain how much the royal books meant for Korean people and how important it was to return them to Korea, one and a half years ago,” he said.

Some of the Korean public seems unsatisfied because the books were loaned, not permanently returned, but it took more than 20 years of tremendous efforts just to get them to Seoul.

“Before we discuss the royal books further, I want to send a clear message to Lang, ‘Merci Jack Lang,’” Chung said.