[ The Korea Herald – Send E-mail ]
New museum seeks harmony with surroundings
By 김윤미
Published : Apr 17, 2011 - 18:39
Updated : Apr 17, 2011 - 18:39
The architect-in-charge of the highly anticipated Seoul branch of the National Museum of Contemporary Art has admitted it will be smaller in size than had been originally planned. The museum is scheduled to open at the former Defense Security Command complex site, known as “Gimusa,” in central Seoul in 2013.

“We are trying to find ways to secure as much space as possible underground that does not interfere with the space below the Jongchinbu building. The plan is not complete yet,” Mihn Hyun-jun, principal architect of mp_Art Architects and assistant professor at the school of architecture at Hongik University, told The Korea Herald.

Tucked behind pink temporary walls, the demolition process was underway at the Gimusa site last week. Everything was torn down and dug up in search of ancient artifacts except for the former command headquarters and several protected trees.

The museum has been the talk of South Korea’s art scene; first, because its operators vowed it would be a world class museum like New York’s MoMA or London’s Tate Modern, and later because stone steps which belonged to Jongchinbu, the office for royal family affairs in the Joseon Dynasty, were unearthed at the site last year.

As the Jongchinbu building, which had been moved to Jeongdok Library in 1981 by the military authorities, was soon to be moved back to its original location, the whole museum construction was reconsidered by many governmental organizations. Voices clashed on what was more important; conserving Jongchinbu or building a cutting edge art museum.

Only a few weeks ago the plan for the museum finally passed the deliberation of Seoul Metropolitan City and the Cultural Heritage Administration, but on the condition that nothing be built below the Jongchinbu building. Two exhibition rooms of 991.7 and 661.1 square meters which were originally planned to be under Jongchinbu are to be downsized.

Other big changes are expected as most of the exhibition spaces were planned to be underground, taking up more than 25 percent of the total structure. This is because the maximum height of the museum is supposed to be below 12 meters to keep in harmony with Gyeongbokgung and other “hanok,” or Korean traditional houses, in the surrounding area. 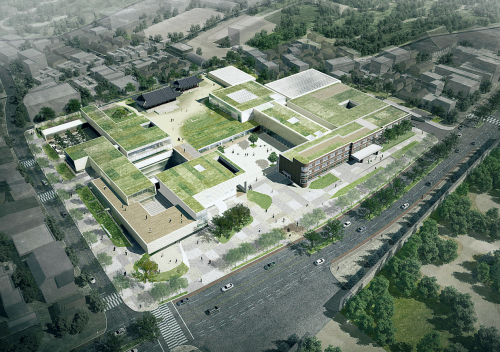 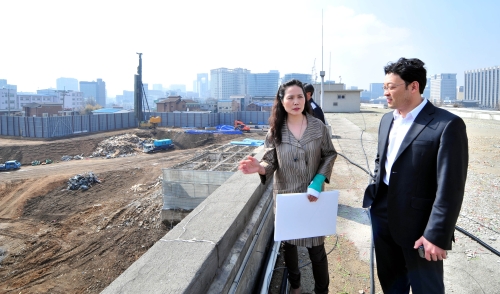 Mihn Hyun-jun (right), architect-in-charge of the National Museum of Contemporary Art’s Seoul branch, and Kang Seung-wan, head of the new museum planning team, talk at the branch site.(Kim Myung-sub/The Korea Herald)
Mihn’s plan was selected among 113 applicants last August. Though he could be forgiven for being frustrated with what is going on, he said he had expected the situation more or less because the area is designated as a relic protection site.

“I even expected that something from the Baekje Dynasty could be discovered. The reason our plan was selected was because it can flexibly deal with additional relic findings. But only some small pieces of white porcelain and roof tiles have been additionally excavated so far, and there is a small possibility that something larger will be found from now on,” said Mihn.

Kang Seung-wan, head of the museum’s new museum planning and construction department, added that the original plan was an attempt at cherishing Jongchinbu and not to destroying it, all the while building a new museum.

“None of the buildings in Korea are constructed below relics except for Seoul City Hall. There are some examples in the world, though, like the Orangerie Museum in Paris or the Singapore Art Museum which will soon open. We tried a new thing, it did not work out, so we are willing to amend the plan,” said Kang.

“When there is a relic and no one can enter it, it becomes a ghost house. So we wanted to make the best use of it (Jongchinbu). But the relics officials tend to be a bit conservative, and there was a lack of communication,” added Mihn.

Mihn’s plan is to turn the museum into a quiet backdrop that makes Gyeongbokgung and Jongchinbu stand out. Discussions are ongoing between the museum and the Cultural Heritage Administration on how to make use of the Jongchinbu.

The biggest worry, however, is that the amended plan might turn out less impressive than the original one since the overall size will be scaled down. Kang said that it is not an issue because only 30 percent of the total area was allocated to be exhibition rooms anyway.

“The exhibition spaces in MoMA, Tate Modern, Pompidou and Reina Sophia Museum all mark below 30 percent of the total area, too. But the beauty of the Seoul museum will be in its many multipurpose spaces which will be flexibly used to display, make and enjoy various genres of art,” said Kang.

Along with white cube exhibition halls, there will be theaters that showcase performances, music and dance. Site-specific works will be installed in every nook and corner of the museum including the lobbies, stairs, elevators and restrooms so that any passersby can enjoy art. The museum is contacting around 20 renowned local and international artists to commission site-specific artworks.

“Cafes and restaurants will be built at the spots that have the best views. World famous museums are all situated in the city’s central area so that people can easily make a visit on their way to somewhere. Our national museum was only in Gwacheon so it was hard to do that. Our goal is to allure people back to art museums, to make them feel comfortable first by having them hang out at cafes and restaurants,” said Mihn.

Besides, the site’s eventful history itself is the museum’s best quality, said Kang. First built as a hospital by the Japanese in 1928 during its colonial rule, Gimusa is also where former president Park Chung-hee died in 1979 and former president Chun Doo-hwan controlled the military during his reign in the 1980s.

“It is meaningful that the yolk of Korea’s modern history is ending up as an art museum. We will be adding a new meaning to it. Its historical background will differentiate the museum from the others,” Kang.

Two Korean photographers, Noh Suntag and Baek Seung-woo, have been capturing the changes of Gimusa since Oct. 2009. They will continue the project until the opening day of the new museum and showcase the works at the opening exhibition.

Building permission will be finalized after the plan passes one final deliberation on construction and traffic on April 21. The excavation process for artifacts will be finished by May, and construction is scheduled to start within the year.