[ The Korea Herald – Send E-mail ]
Monaghan’s Midwestern roots keep her grounded despite fame
By 이다영
Published : Apr 15, 2011 - 18:29
Updated : Apr 15, 2011 - 19:25
In the new thriller “Source Code,” Michelle Monaghan plays a Chicago woman described by the Jake Gyllenhaal character as “beautiful,” “decent” and “honest.” Beauty comes cheap in the movies. Hollywood boasts an eternally full quota of attractive nuisances, the nuisance part (separate from the beauty part) being the expressive limitations of those who achieve stardom without really having much star quality.

The ability to convey decency and honesty in a lively way on-screen, however, is rarer, and more interesting. This brings us to Monaghan, who at 35 may be a more familiar face than a name, but whose well-regarded career has avoided the rut of typecasting.

This is just how she wants it. “It’s important to keep Hollywood guessing,” she says over coffee at a downtown restaurant. “I’ve done one or two romantic comedies” ― her resume includes “Made of Honor” and “The Heartbreak Kid” remake ― “but if that was all I did, it’d be the end of my career. I want to be around a long time. I love my job.”

Your average Midwestern chauvinist would argue that Monaghan’s forthright, avid-eyed appeal has to do with her point of origin. She comes from tiny Winthrop, Iowa, in the eastern part of the state. In the 2000 census, Winthrop’s population was 772. For 40 years her father worked at a copper factory in Cedar Rapids, retiring recently to concentrate on a 90-acre family farm yielding corn or beans, depending on the crop rotation. Her mother ran a day care center out of the family home. They’re active grandparents, with nine grandchildren. Michelle has two older brothers, one of whom ended up in Cedar Rapids, the other in Cedar Falls.

Monaghan’s high school years were dominated by the speech team, drama rehearsals and, as a senior, the duties of class presidency (senior class: 38 kids).

“She always had talent,” recalls Cheryl Beatty, who coached the speech team and directed plays at Winthrop’s East Buchanan High School. Beatty asks me to hold the line while she checks the 1994 yearbook for Monaghan’s credits. “Let’s see ... she wasn’t in band ... or vocal ... but she did ‘Plaza Suite’ when she was a junior. In ‘Sleeping Beauty’ she played one of the ladies in waiting. She wasn’t even Beauty!”

Beatty states, sweetly yet proudly, that Monaghan was “your typical small-town girl. She has a strong family background. Good, solid upbringing. She was friendly to everybody. Everybody.” Neither Beatty nor Monaghan recalls Monaghan ever talking about becoming an actress. She had her sights set on broadcast journalism, Beatty remembers. 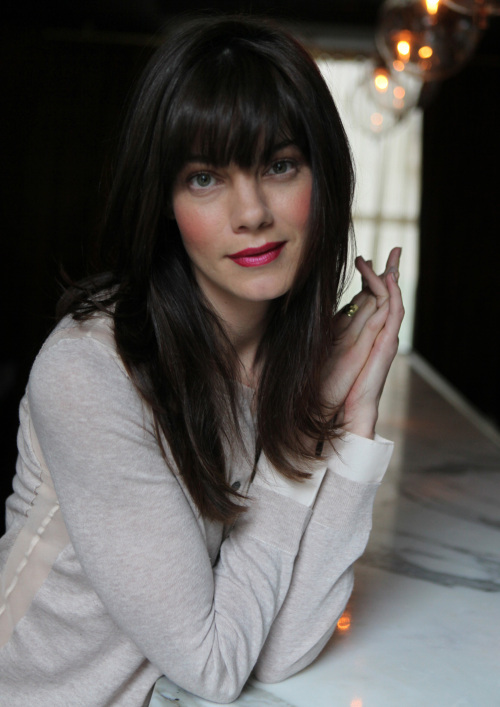 Actress Michelle Monaghan, star of “Source Code,” poses for portrait in the bar of the Elysian Hotel in Chicago, March 15. (Antonio Perez/Chicago Tribune/MCT)
Then, in her senior year, Monaghan left Winthrop for a little modeling gig. In Japan. And there goes the typical-small-town-girl angle. This would’ve been out of the ordinary for most big-city high schools. In Winthrop, it was extraordinary, and the money was good, and a seed was planted.

After graduation she followed her high school sweetheart to Iowa State for a semester, then thought better of it, and transferred to Columbia College in Chicago as a journalism undergraduate. “News and newspapers were always at the forefront of my household growing up,” she says, “and now, when I look back on it ... I suppose if you come from a small town you always wonder what’s out there, in the world outside your own.”

Her introduction to Chicago came at age 16, on a family trip to see a Cubs game. “In the back of my head,” she says, “I think when I saw Chicago I knew where I wanted to go to school.”

She paid her own way thanks to the Elite modeling agency. Monaghan took classes early mornings and evenings and worked in between, “driving up to Minneapolis for a Target ad, or up to Milwaukee for something else, or off to Dallas for the afternoon. I was so fortunate. On my school breaks I’d travel overseas and make enough money for tuition for the upcoming year.”

Then, a year before she planned to graduate from Columbia College, she decamped for New York. It went well: more modeling, some commercials, some television, then some more television and her first small roles in films. In 2000 she met her future husband, Australian graphic designer Peter White, with whom she has a daughter, Willow. And then came “Kiss Kiss Bang Bang,” her seventh picture but her first major part onscreen, co-starring as a small-town Midwest girl down, but not out, in Hollywood alongside Robert Downey Jr. and Val Kilmer. The film was written and directed by Shane Black, recently signed for “Iron Man 3.”

“To have that experience that early on,” she recalls, “meant everything to me. Such creative freedom. Robert was so good to me. He taught me how to improv! He just made me do it. ‘OK, everything Shane just told us, we’re not gonna do any of it. We’re gonna make up the lines! OK, ready, 1-2-3 let’s do it! Let’s go!’” Monaghan was pretty enough to fulfill that role’s decorative requirements, but off-center and quick-witted enough to make the results distinctive.

“I saw her first in that film,” says “Source Code” director Duncan Jones, “not just holding her own, but giving as good as she got. She was fantastic in that. And I thought if we could capture that Michelle Monaghan in our film, we’d be in good shape. And I think we did more than that.”

From “Kiss Kiss” Monaghan went on to co-star in “Mission: Impossible 3” with Tom Cruise, “Gone Baby Gone” with Casey Affleck, “Eagle Eye” with Shia LaBeouf (her high school drama teacher’s favorite) and others. She took two years off after the birth of her daughter before resuming work with “Source Code” and the upcoming “Machine Gun Preacher” with Gerard Butler and Michael Shannon.

“Keeping a positive outlook while she’s working is part of her skill set,” says Jones. “She knows how to make a film set an enjoyable place to work, which is really important, because film sets have the potential to be really, really tense environments.”

Monaghan has heard it before. “I do feel pretty grounded,” she says, a little sheepishly. “I would say I’m pretty easy to work with. I think I’m pretty easy to live with, too, though maybe I’m just fooling myself on that one.” She laughs. “As hard as it is to navigate work and family, it’s important for me to be a good mom. I don’t know what the ideal balance is, really, the right amount of work. We want to have a bigger family. I’m just trying to stay open. Life happens, and work happens, and you just kind of figure out how they go together.”

Next up is a movie she’s producing, based on a book she optioned for herself. It’s “The Blonde” by Duane Swierczynski, a race-against-time thriller akin to “D.O.A.” The producer/star describes it as “kind of like ‘The Bourne Supremacy’ for a girl,” her eyes widening at the prospect. “‘Bourne Supremacy’ meets ‘Run Lola Run.’ We haven’t found the guy yet, but we think we have our director.”

Filming location? “I’d love to bring it to Chicago, to be honest,” she says.

The way she talks about the project in development, Monaghan sounds like complementary versions of herself. She’s the woman taking charge of her career, sussing out the benefits of taking a studio picture in order to pay for doing a more challenging indie film. Yet there’s that persistent, buoyant strain of niceness. She is, in other words, apparently not so different from the Michelle Monaghan who remembers arriving in New York years ago and telling her prospective agent, “I don’t know what I’m doing. But I promise I’ll work hard.”