The European Parliament ratified the bilateral trade pact by an overwhelming majority in February, leaving the Seoul government impatient to have the deal take effect by July 1 as previously agreed by the two governments. 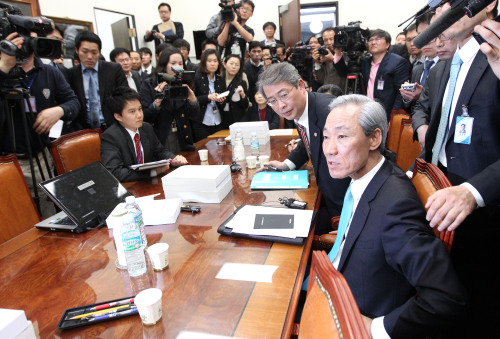 Minister of Trade Kim Jong-hoon (right) lashes out at Rep. Kang Ki-gap of the Democratic Labor Party after the Korea-EU FTA was voted down by a parliamentary subcommittee Friday. Kim told Kang to “study” about the FTA. (Yonhap News) 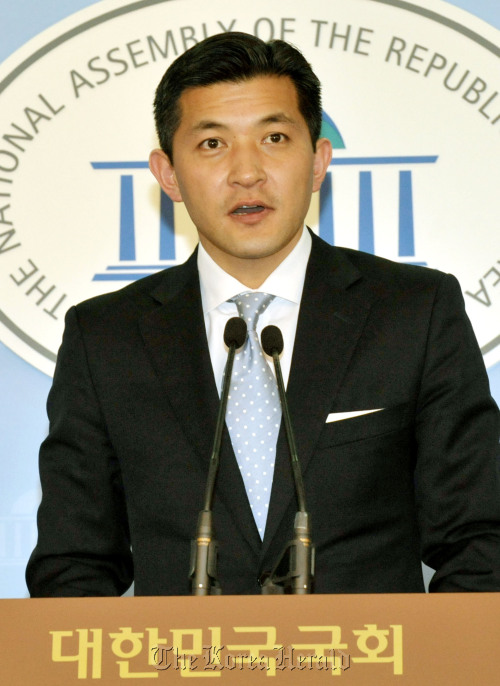 Rep. Jungwook Hong of the Grand National Party speaks to reporters after withdrawing from the vote. (Yang Dong-chul/The Korea Herald)
The deal calls for an elimination of 98 percent of import duties and other trade barriers in manufactured goods and agricultural products between the two sides within the next five years, a change opposition parties say calls for sufficient protection for the local hog and dairy industries.

The controversial bill was thrown out by the seven-member National Assembly Foreign Affairs and Trade Committee as the ruling party failed to secure the four votes necessary for majority approval. Among six legislators who took part in the vote, three approved of the bill, two rejected and one cast a blank ballot.

“The abstention vote was made to express my opposition over the (ruling party’s) move to railroad the bill,” Rep. Jungwook Hong of the ruling Grand National Party told reporters shortly after withdrawing from the vote.

President Lee’s party, which controls 171 seats in the 298-member unicameral legislature, had said it may approve the bill unilaterally, accusing rival parties of making “blind objections.”

Opposition parties, led by the largest Democratic Party, have been demanding the government first present sufficient measures preparing for the fatal blow the influx of competitive European dairy products will cast upon the domestic livestock industry.

They also claim more time is necessary to thoroughly check the deal for any mistranslation.

“We are not saying no to discussions,” Park Jie-won, floor leader of the DP, said during a party meeting Friday. “But we cannot ratify a faulty deal.”

First submitted to the South Korean parliament in October last year, the Korea-EU free trade deal was withdrawn twice due to the differences between the Korean and the English versions of the pact.

Opposition parties claim President Lee should apologize to the public for the translation errors and take time to reexamine the whole agreement with the participation of experts.

As the subcommittee rejected the bill, it will be submitted to the plenary session for discussions over how and when the parliament should deal with it.