A fresh online luxury retail channel is eying a slice of the pie in the conglomerate-dominated local market with price competitiveness and quality service.

The launch of flash sale site Tryst on Wednesday, the first of its kind here, may be intriguing news for savvy Korean shoppers.

The website can be described as the Korean version of Gilt Groupe, said its chief executive Kim Ho-seok. Gilt is a hugely popular U.S. private sale site launched in 2007.

Online private sale sites may be an unfamiliar concept for local consumers. These outlets provide members with high-end brands’ past-season products at 30-80 percent less than retail prices for a limited time.

The first movers were Net-a-Porter of the United Kingdom and Vente-privee of France, launched in 2001. Since then, the market for these channels has matured, reaching average annual sales of $1 billion worldwide.

With just one month of pilot-operating, Tryst has been receiving satisfactory responses and sales, Kim said, drawing more than 12,000 subscribers upon the news of its launch with little marketing.

“I felt that there is actually a big demand (for such a channel) here and a potential for success as long as we provide subscribers with a variety of ‘right’ products,” Kim told The Korea Herald.

Tryst offers high-end clothing and accessories from Milan and New York procured through its merchandisers at up to 70 percent less than retail prices. It currently works with leading designer brands including Prada, TOD’s and Salvatore Ferragamo.

The lower prices are possible because the business minimizes retail margins and customs by directly purchasing products from foreign brands, according to Kim.

“The essence of this business is in connecting consumers and brands without an agent who takes a large commission in between. We source our products by forging a global merchandising network and relationships with brands,” he said.

The website is yet to boost the diversity of its selection, as it is still undergoing the process of expanding its global sourcing network, according to Kim.

It plans to expand its selections from clothing and accessories for women and children to menswear, should the business become more feasibility, the CEO said.

This idea comes as men shopping for themselves and consuming luxury goods has become increasingly common here.

The introduction of Tryst may seem quite late considering the large interest for and consumption of luxury fashion goods in the local market.

The CEO attributed the rather late entry to the difficulty of fostering a good sourcing network and the already fierce competition in the industry. 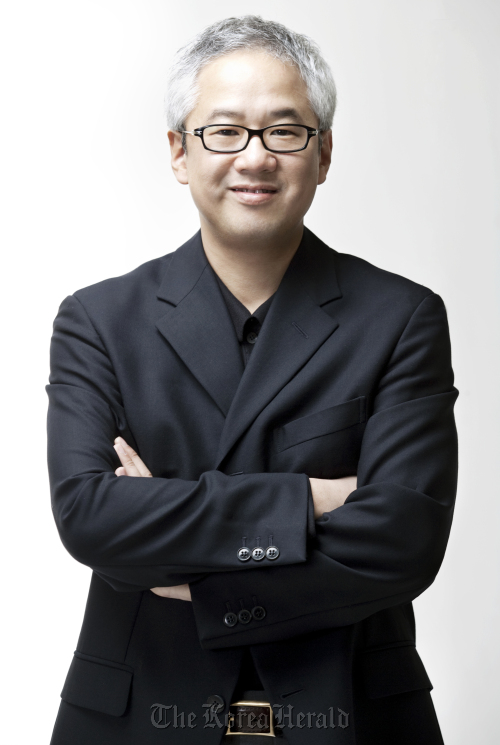 Kim Ho-seok
But this and the nascence of the business was what inspired Kim to become a pioneer, believing he had the appropriate skill-set and talent thanks to his unique background in global operations, he said.

Kim served as the vice president of Widerthan Co., a provider of wireless messaging and multimedia solutions from 2000-07, before the firm was sold to RealNetworks of the U.S.

The firm was widely known for its introduction of ringback tones, tunes callers hear while waiting for a call recipient to answer their phone. Kim listed the firm on the NASDAQ stock exchange during his post there.

So far, most luxury goods consumption in Korea has taken place at department stores operated by local retail giants including Shinsegae and Lotte, which account for more than three-quarters of the amount.

This was mainly due to the credibility offered by them, despite the availability of other channels including premium outlets, and direct and indirect purchases from overseas online sites.

However, as Korea is widely known for its higher-than-global average luxury goods prices, there has been a continual demand for more innovative goods which offer consumers more affordable prices.

“I think we may be able to initiate momentum for consumer-friendly competition in the local luxury market should we develop scale in the near future,” Kim said.

“We are making an effort to change the retail structure here.”

Kim in particular saw the potential of the venture in its online form.

“I think offline premium outlets have already become anachronistic in that they do not have much price competitiveness (compared to those online) due to the diverse forms of required overhead and thus are not very appealing to consumers,” he said.

The CEO is expecting that subscribers of 300,000 and annual sales of 250 billion won in five years would place the business on a stable stage, he said.

The main target customer of Tryst is women aged 25-35, Kim said, as they have a large interest in top-designer clothing and accessories but still seek bargains.

Building credibility and quality assurance is a major challenge for Tryst, Kim said.

E-commerce here has grown greatly over the years in Korea but mostly for low-priced products, rather than expensive goods, due to such issues.

“It’s a key task for us to let consumers know that things they purchase online are not always ‘crappy,’” Kim said.

“We are also seeking collaborations with larger firms ― either those in finance or retail ― to resolve credibility issues and bolster marketing.”

Kim added that the reliability issue is expected to be gradually resolved when online high-end fashion shopping becomes more common among Koreans, as it is with shoppers in the U.S. and Europe.

Being conscious of the growing mobile commerce market and the significance of timeliness for the business, Tryst will launch a mobile application in the latter half of the year, Kim said.