Army Gen. Han Min-koo, chairman of the Joint Chiefs of Staff, inspected the drill at the Gori nuclear power plant in Busan, with hundreds of soldiers from the military’s chemical, biological and radiological units as well as police officers and firefighters taking part, the JCS said in a statement.

“If emergencies of any kind take place at nuclear plants, the nation will face a very dangerous situation,” Han said in the statement. “By holding regular and intensive drills, we must build the perfect disaster preparedness.”

The one-day drill at the Gori plant, which has two nuclear reactors, tested the coordinated ability of the military, police, government and private sector to cope with a nuclear accident following a natural disaster, the JCS said.

One of the reactors has gone offline due to an electrical malfunction, a state nuclear power company said Wednesday, amid growing controversy over the extension of its life. 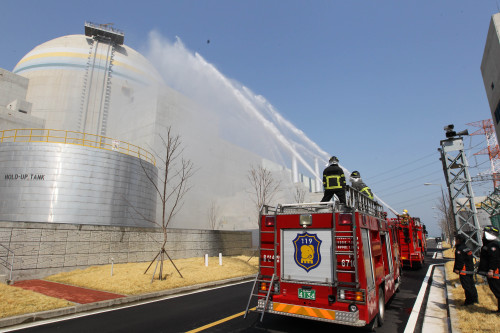 Firefighters in an emergency drill at the Gori nuclear power plant in Busan on Wednesday. (Yonhap News)
The Korea Hydro & Nuclear Power Co. said the Gori-1 reactor was turned off Tuesday night after experiencing problems with electricity supplied from outside the plant.

“A key electrical component that broke down is in the process of being repaired and the incident has been reported to the state Nuclear Safety Commission,” the KHNP said.

The company stressed there were no safety risks to the light-water reactor and no radiation leaks.

The 587,000-kilowatt Gori-1 unit is the oldest of 21 commercial reactors in the country and started full-fledged commercial operations in April 1978.

It was temporarily turned off in June 2007 at the end of its 30-year operation life cycle, but received government approval last year to stay online for another 10 years after undergoing updates to its safety systems.

South Korea also said it will set up a taskforce with related ministries to regularly examine the radiation contamination level of its ocean at some 57 coastal regions through August, the Prime Minister’s Office said.

Concerns have been growing here since Japan discharged some 11,000 tons of contaminated water into the ocean, after using it to cool off reactors in its wrecked Fukushima Daiichi plant, without first notifying neighboring countries.

The Seoul government also plans to conduct regular examinations on all agricultural and livestock products imported from Japan and set up new radiation standards for children’s food, the office said in a press release.