“What a great start to the season; lots of kids, beautiful weather and excellent facilities provided by our hosts, Dulwich College Seoul,” said Guillaume Lauzol, the club’s new president.

M. Lauzol emphasized how grateful Han River Pirates were for the loan of facilities. “Dulwich has been an exceptional host and their support means a lot for the whole community here in Seoul.”

While the club is open to all boys and girls, the leadership has always come from the international community and this year the management team is entirely French.

“France is famous for its attractive attacking rugby,” said Nic Klebnikoff, whose son has played with the Pirates for several years “So we hope some of the French flair and flowing style will rub off on our players this season.”

Watching the proceedings from the touchline on Sunday were club patrons Jeremy and Julia Burks, who were among the original parents who kicked off the Han River Pirates in April 2005. 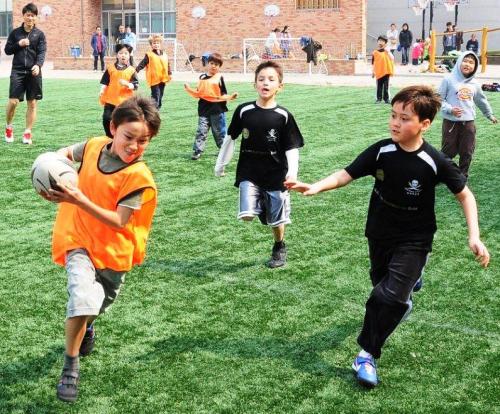 Kids enjoy a game of touch with Han River Pirates at Dulwich College Seoul. (Shane Lowndes)
“We are so happy to see the club flourishing six years on,” they said. “Han River Pirates holds many happy memories for us and for many families who spent time in Seoul”.

The club plays touch, a non-contact version of rugby that allows players to develop basic skills such as passing, catching and positional play. It also encourages speed and agility and always a spirit of teamwork and fair play.

Because it is non-contact, touch is a sport that boys and girls can compete together in on even terms. The team meets each Sunday 9-11 a.m. at Dulwich International School (www.dulwich-seoul.kr) and, for parents or children interested in playing, all information can be found at www.hanriverpiratesrugby.com.