Korean authors should move on from nationalist writing and learn about the current trends in world literature, Kim Seong-kon, director of the third Seoul International Forum for Literature, said.

“What the global audience is interested in can be quite different (from what Korean authors think),” Kim told The Korea Herald. “I think that is one of the reasons why most of Korean novels don’t do very well overseas after being translated. So it is important for our writers to have an opportunity to interact with foreign writers and learn what’s going on outside Korea.”

The third Seoul International Forum for Literature, which will be held next month, aims to build a bridge between Korean authors and the international literary scene.

Inviting a total of 13 big-name foreign authors and scholars, including two Nobel Prize winners ― French author Jean-Marie Gustave Le Clezio and Chinese-born novelist Gao Xingjian ― the upcoming forum will consist of lectures, open debates, and Q & A sessions under the theme “Writing for the Globalizing World and the Human Community.”

Kim, who also serves as the director of Seoul National University Press, has been in charge of the literary event since the very first forum in 2000. Funded by the Daesan Foundation, the forum is held every five years.

Kim emphasized that we are now living in “the age of post-ideology” and Korean writers should choose literary topics that can also be easily shared with readers outside Korea. 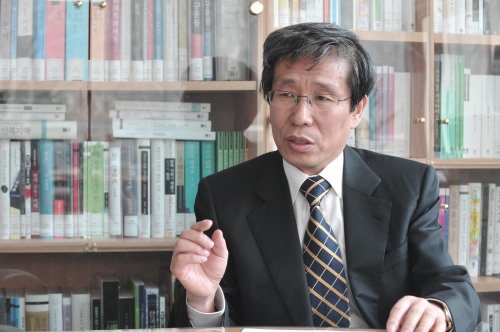 Kim Seong-kon, director of the Seoul International Forum for Literature, speaks in his office at Seoul National University in Seoul on March 31. (Chung Hee-cho/The Korea Herald)
“Themes that concentrate on Korean nationalism and the Korean War can no longer attract international audience,” Kim said. “The days of Marxism and nationalism are over. But a lot of Korean authors still remain in such ideological writing. I’d like to see them moving on.”

The upcoming forum’s sub-themes include “The Self and the Other in an Age of Multiculturalism,” “Literature and eco-criticism,” and “Writing for the World Market and Multimedia Environment.”

“Many of the writers we’ve invited this year are either bilingual or live in foreign countries,” Kim said. “Japanese-born writer Yoko Tawada, for example, writes in both Japanese and German. Chinese scholar Liu Zaifu is in exile in the U.S. Nigerian writer Ben Okri has lived both in London and his home country. These writers set different ways of writing in the era of multiculturalism.”

One of the biggest achievements of the past two forums are the creative feedbacks from the former invited guests, Kim said.

British writer Margaret Drabble, who was introduced to “Hanjungrok,” the famous memoir written by Lady Hyegyong ― the crown princess of the Korean court in the 18th century ― while attending the first forum in 2000, published a novel called “The Red Queen” in 2007 inspired by the life of the crown princess.

Japanese writer Kenzaburo Oe and Turkish author Orhan Pamuk attended the second forum in 2005. Both of them published personal columns for local dailies of their home countries about their experience in Seoul, after their return.

French Nobel Prize winner Le Clezio, on the other hand, taught French language and literature at Ewha Womans University in Seoul from 2007 to 2008, after attending the second forum in 2005.

“There are two sets of myths about this forum,” Kim said. “One is that someone would win a Nobel Prize after they participate in the event. Le Clezio and Turkish writer Orhan Pamuk belong to this case. The second one is rather sad. It’s that if you participate in the forum at an old age, you’d die a few years after you return to your country. French scholars Jean Baudrillard (1929―2007) and Pierre Bourdieu (1930―2002) happened to be that way.”

Though the current world is consistently changing, the essence and the role of literature stay the same, Kim said.

“There are more platforms for writers now,” Kim said. “A game can be a piece of literature, so can be an anime series. A literary work will not take the form of a book anymore. But regardless of the forms, authors should never turn away from their reality. They have to stand by freedom, speak up and criticize. They have to write about their era and let people know. The very basic role of literature is to show people how to live and choose to live well.”

The forum runs from May 23-27 at Kyobo Convention Hall in Seoul. Anyone can attend the event and will be given an opportunity to speak to the invited authors and scholars.