The air of change sweeping through North Africa and the Middle East is taking no prisoners.

From peaceful protests to violent altercations, “hard-line” and “moderate” Muslim countries are faced with an unforeseen destiny that started in Tunisia and is transforming the region’s dynamic and political landscape into what the protesters hope will be free and democratic societies.

In Morocco, a country that seemed untouched by the demonstrations, the winds of change blew from the east.

In response, King Mohammed VI’s steps to overhaul Morocco’s constitution have ensured he remains in control of the reform process.

“In his speech, the king initiated the new comprehensive package of constitutional reforms and highlighted the historic responsibility involved in the task of shaping an advanced constitution and the values and democratic principles in which it is rooted,” said Morocco Ambassador Mohammed Chraibi.

“The King emphasized that, while considering the accomplishments attained in the area of promoting democracy, Morocco is presently in a position to start enshrining advanced regionalization in the constitution,” he told The Korea Herald.

As a war rages on in Libya, and protests turn into crisis-mode in Yemen, Bahrain and Syria, Morocco is quietly undergoing what its prime minister has called “a peaceful revolution.”

While acknowledging the immense challenges ahead, the aspirations expressed by the people and the need to preserve accomplishments and redress inadequacies, the king expressed his commitment to give strong momentum to the reforms under way.

In a rare appearance on state television, the king announced that he was ready to give up considerable powers, including the right to appoint the country’s prime minister and dissolve its parliament. 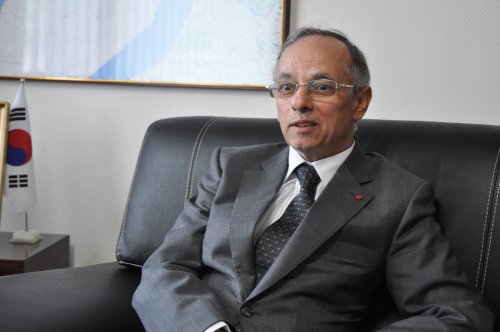 Morocco Ambassador Mohammed Chraibi (Yoav Cerralbo/The Korea Herald)
The king said, “Our shared goal is to launch a new democratic, constitutional era which strengthens the rule of law and the institution-based state, contributes to dignified life, fosters the values of citizenship, strengthens the nation’s unity and safeguards our sovereignty.”

Since the protests were started by the youth of Morocco, the king invited the leaders of the Feb. 20th Movement ― the youth-led group named after the day of protests ― to join the process and propose changes to the country’s constitution.

Even the international community, particularly the United Nations secretary general, the United States, France, the United Kingdom, Spain, Russia, Japan, and International Organizations such as NATO and the European Union “have praised the constitutional reforms that His Majesty announced and his constant will to listen to his people and their aspirations.”

Adlai E. Stevenson, former U.S. vice president from 1893―1897, once said about the press, “The free press is the mother of all our liberties and of our progress under liberty.”

This undeniable right to flourish in a free and democratic country must have resonated with the Moroccan government because last week it promised reforms of the current press code which will be based on democratic benchmarks.

To further reduce social tensions, the king is examining the possibility of granting new benefits to public sector workers worth $5.4 billion.

Yet the first question is how to get from A (the king’s words) to B (an improved judiciary)?

This is where judicial independence plays a crucial structural and behavioral role.

“We plan on elevating the judiciary to the status of an independent power,” he said.

Morocco has had a monarchy since before gaining independence from France in 1956 but the royal family today costs Moroccan taxpayers $140 million a year ― more than twice the cost of the British monarchy.

But the protesters are not demanding to overthrow the king, who is relatively respected and liked, who took over the reins of the monarchy after the death of his father in 1999.

What protesters want instead is, in a nutshell, for him to have less power.

One constitutional change demanded by the protesters is the elimination of an article that states that the king is the nation’s highest religious leader.

“These substantial reforms, which are part of the ongoing modernization of the country, reflects the king’s strong desire to lead a peaceful, yet resolute, evolution allowing Morocco to harmoniously continue its adjustment to the important changes and developments taking place in the international arena,” said Chraibi.